JOY IN PEOPLE – ARE YOU DOWN WITH THAT?

Bring back the art of Banners!

To tell the truth, when we arrived at the Hayward Gallery to check the double header of David Shrigley and Jeremy Deller I knew very little about either. Basically, I knew Shrigley was one whimsical dude while Deller had studied art history at The Courtauld, notched up a Turner Prize, and had a brass band rock a bunch of acid house anthems. That said, our little posse was open and quite excited about both shows. I was especially enthusiastic about Deller’s reproduction of Valerie’s cafe from Bury Market – a place I’d frequented as a kid. 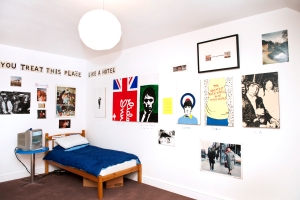 One enters the Joy In People show through a replica of bedroom that Deller had thrown open to the public in his family house, when his parents were away. As participants in this show it was our first stop and a little unnerving. It struck a deeply resonant chord in relation to a project I’m currently engaged with and the cultural framework gave us a foretaste of the artist’s pre-occupations with diverse manifestations of English culture. Turn a corner and a projection entitled Jerusalem featured ecstasy inspired rave-dancing in Deptford alongside Morris men strutting their stuff.

In 1988, Jeremy Deller was 22. He is a product of the feisty, e-fuelled and trance inducing rave culture that swept across the nation. It permeates his world view and as an observer, thinker and facilitator – as opposed to painter or sculptor – he readily gives voice to others alongside his own. A piece on the Manic Street Preachers tunes into their fans and their obsession and Deller gives them free reign. He collects memorabilia and maps out his search of the legendary Bez in Manchester. He overturns musical preconceptions on Steel Harmony by having a steel pan band play the music the Buzzcocks and Joy Division, and his combination of The Fairey brass band and Acid House has definitely proved inspired.

While sitting in Valerie’s cafe, sipping of a hot tea with 2 sugars (Bury market style) we scrutinised the wall emblazoned with his classic flow chart. It links Acid House to electro to Psychic TV to the SummerOf Love to Clapham Common to Ibiza to superclubs to advanced capitalism to privatisation to the miners strike to Brass Bands! It’s a mind-map that underpins a large part of the show. 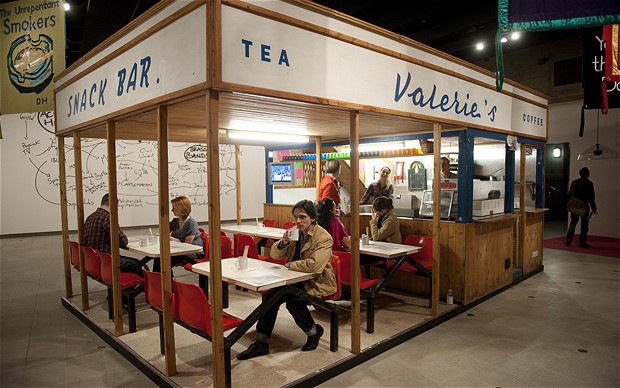 Having grown up in the hinterlands of Manchester I am hard wired into an age of Trade Union banners and Wakes Week walks and I found Jeremy Deller’s curatorial take on the culture quite moving. However, I was totally unprepared for the impact of his Battle Of Orgreave piece. My memories of the Miner’s strike remain vivid. One of my best mates was a former Yorkshire miner and the impact on his family was deeply divisive.

Having passed through a room of miner’s memorabilia including badges (and their relevance), posters showing the actual extent of the closures and the reality of Thatcher’s lies to the nation, we progressed to Mike Figgis’ film documenting the re-enactment of the the actual Battle of Orgreave.  Staged like any other historical re-enactment the cast of 800 featured battle hardened nerds from around the country along with 280 former miners who 18 years earlier had gone toe to toe with a militarised police force. 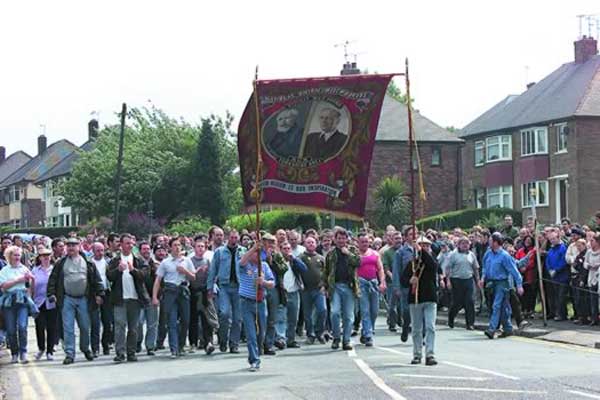 The Battle Of Orgreave- The re-enactment!

Memories of Peterloo & Orgreave - The Re-enactment! 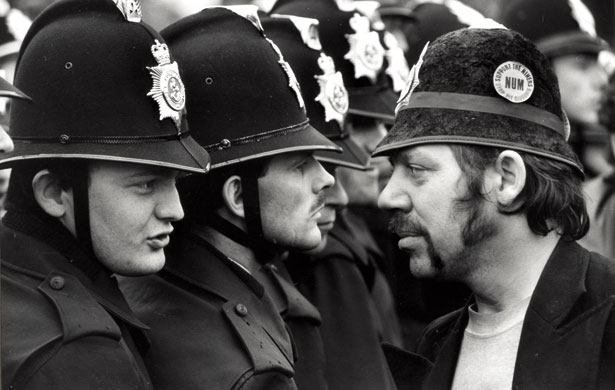 The actual “battle” was an emotional and enlightening event that inevitably brought back a lot of dark memories for the miner’s involved but was also clearly cathartic for people who saw their communities destroyed, never to recover.

For me, the film brought back memories of a head on, bitter, physical clash between the miners and the Met on the Grunwick picket line in north London where I ended up getting a roughed up by the police and then was suspected of being an agent provocateur. I never did thank the photographer who proved it wasn’t me who shoved Arthur Scargill into the arms of the Special Patrol Group!

Another brew was needed at Valerie’s before taking on Deller’s trip around the USA with a wrecked car that had been employed as a car bomb in Iraq, a former Marine and an Iraqi refugee.  In each city and town they recorded responses and conversations with curious passers-by.  Deep stuff.

Reeling from the USA, we happily picked up our glasses, took a seat in the dark and awaited the arrival of an alternative 3D world that was occupied by bats.  At that point, we were on overload and contemplated making a move. We tried an encounter with David Shrigley’s artwork but couldn’t handle it. We needed to come again! However, as we were poised to leave we noticed that one of our fellow travelers was mesmerised by an installation that we’d overlooked.

Film plays a serious role in Deller’s repertoire. It serves to document a myriad of projects rooted in grass-roots culture – Deller calls it “social surrrealism”, and this final piece was a classic.  It documented the life of “Exotic” Adrian Street – an extremely camp and flamboyant champion wrestler who would have graced our Saturday afternoon TV screens in the 60s. Interviewed in his home in Florida and spliced with archival photos and film, we are confronted with an extraordinary life which starts in the coal fields South Wales. This was time well spent and the perfect end to an incredibly engaging afternoon.

It’s on until Sunday 13th May!

2 Responses to JOY IN PEOPLE – ARE YOU DOWN WITH THAT?