It doesn’t seem right that nigh on 20 years have slipped by since that natural mystic and astral traveller,  Sun Ra, left us for other worlds.

However, the spirit of Sun Ra is alive and kicking, as the full house at the Barbican’s Transcender Festival testified. An audience that reflected all walks of life gathered to hear the Arkestra that 88 year old alto saxophonist, Marshall Allen,  has kept alive since taking the reign from tenor saxophonist, John Gilmore, who tragically  died from emphysema in 1995.

It was down to the dreadlocked  Chicago based techno visionary  Jamal Moss aka Heiroglyphic Being to introduce the 11 piece ensemble with a reading of Ra’s poem, ‘Astro Black’ and the music that followed took us deep into the jazz tradition and then out out beyond the stars.

There were familiar faces in the ranks of the Arkestra like baritone player Danny Ray Thompson,  who doubled up on flute and bongos,  and the alto saxophonist and congalero, Knoel Scott, and believe me this posse of glittery, caped crusaders can swing. They conjured up shades of a wayward Fletcher Henderson orchestra in full flight in Kansas City and then gave us a taste of the speedy, agile be bop lyricism born of Dizzy and Bird. The Arkestra love to take a riff and work it and on this night, unable to resist the groove, Scott, who is well into his mid fifties couldn’t help but bust a set of capoeira moves including  a couple of heart-stopping cartwheels across the front of the stage! 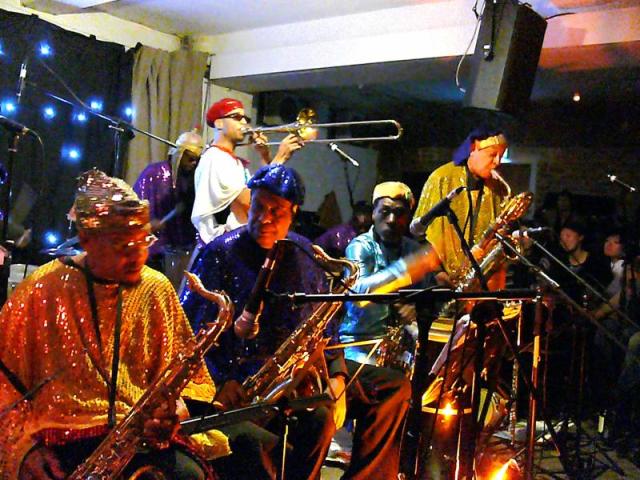 It was scheduled as a game in two halves and as we headed toward the end of the first set my initial frustration with the all too polite volume was waylaid by a gathering momentum and futuristic intensity. Our appetites had been whetted and based on past experiences it could only get better.

As Jamal Moss’ turntablist and digital innovations took take shape in the foyer between sets one erudite associate mused, “This is cool but there’s a danger of it becoming a distraction.” And on that note we headed back into hall to await the return of the Arkestra.

As I had no serious intention of writing up the session, I do not have the benefit of  copious notes.  That was the task of  my journalistic neighbours, who were there there to scribble  comprehensive pieces for The Quietus and http://www.jazz.com. I was simply there for the music.  However, as I now feel motivated to write something please forgive me if I present what transpired in a somewhat random fashion.

Marshall looks more and more like an aged wizard and he was clearly at the helm of the Arkestra.  I have to pay tribute the ongoing physical  impact of his inimitable technique on alto sax and his dexterity on his antiquated electronic valve instrument was enormously effective. His space age volleys of sound furthered Ra’s dedication to electronica and provided the perfect foil for the shards of synth that pianist Farrid Barron dropped into the mix.

The musicianship in the Arkestra is flawless and their choice of compositions  ranged over a host of Ra classics from ‘I’ll Wait For You’ to ‘Angels & Demons At Play to ‘I Am Gonna Unmask The Batman’ and ‘Cosmos Song’. James Stuart’s fluid tenor solos would have benefited from a touch more volume while trombonist Dave Davis and the trumpet duo of Cecil Scott and Fred Adams constantly delivered alternatively lyrical and rapid fire solos. In the absence of  that legendary thunder drum, the surdo of Elson Nascimento added welcome weight and momentum to the rhythms and colours of the Arkestra’s dynamic trap drummer  Craig Haynes.

Behind the Arkestra, amid the ever shifting shapes and colours of the light show, images of Sun Ra came and went and he would have been proud of what his disciples continue to do with his substantial musical legacy. When Marshall Allen and the Arkestra tackled Louis Armstrong’s ‘When You’re Smiling’ they had the whole of the Barbican smiling along with them. They maintain a long lasting and deep faith in the vision of their mentor and while they continue to explore the creative limits of the cosmos there is a warmth, humour and genuine devotion to the music that guarantees –  once they’ve done a full circuit of the hall – a standing ovation.