JAZZMEIA HORN: Once Voice Leaves Another Comes Through.

Just over a week ago, on October 21st, at the New Jersey Performing Arts Center they held the inaugural Sarah Vaughan International Jazz Vocal Competition – “a search for the world’s next great female jazz vocalists “ – and out of 800 contestants it was 21 year old Jazzmeia Horn who was hailed as a “stand out” vocalist and the recipient up their “Rising Star Award”.

Originally from Dallas, Texas, Jazzmeia Horn is currently enrolled in the New School Jazz program in NYC.  As far as I can see, she is no relation to the Miles Davis’ favourite jazz singer, Shirley Horn, but if it’s tradition we are talking about, it’s her  ability to turn a musical phrase from words to feeling that has  earned her comparisons with another great woman vocalist… yes, you’ve got it…. the late great Sarah Vaughan. 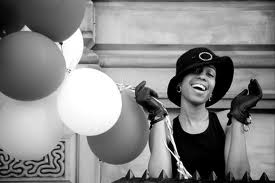 “I’ve always wanted to sing. Since I was young, I wanted to learn every song, remember every line, and then find a way to craft them into my statements, to find a way to make them me.”

While Jazzmeia’s been spotted on the club circuit doing tunes like ‘People Make The World Go Round’ this young singer is is obviously deep into the jazz songbook.  Good thing? Bad thing? I’m not sure. Some of those songs sound unbearably quaint in these times, so my choice of video had to offer a twist on that. Check the vocals she drops on her wikkid version of Charlie Parker’s ‘Billie’s Bounce’.  Jazzmeia Horn owns a voice that is truly her own. Watch out for her.

1 Response to JAZZMEIA HORN: Once Voice Leaves Another Comes Through.