RUBBLE KINGS is an illuminating and poignant the documentary by Shan Nicholson that boldly documents NYC’s gang wars and the truce that led to the birth of b-boying and hip hop. 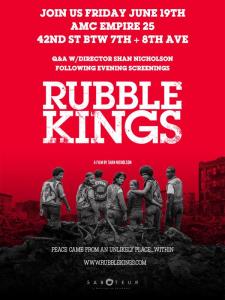 Yesterday afternoon, we slipped into the Curzon Soho to checkout a showing of Rubble Kings – a documentary that revealed the real story behind one of my all time fave films ‘Warriors’. From 1968 to 1975, gangs ruled New York City and the focus of Shan Nicholson’s documentary is the Bronx – “home to 101 gangs… take your pick.”

When images of the Bronx surface here in the early Seventies it was shocking. With its burnt out shells of buildings it looked like bombed-out Beirut had been transported to New York City. The Bronx was once a thriving community and Rubble Kings points an accusing finger at Robert Moses’ urban renewal project for New York City and the Cross Bronx Expressway, completed in 1963, as the decisive factor in the physical demise of the borough. 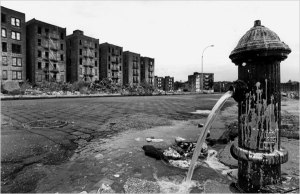 Cutting through the heart of the South Bronx, the highway displaced thousands of residents from their homes and the Bronx’s poor, working-class neighborhoods were hit by the decreasing property value leaving ruthless landlords to torch their buildings for the insurance. Urban decay combined with racially charged tension and a flood of heroin led to middle class and white flight from the Bronx leaving its street corners and rooftops to the gangs. As one former member recalls, “It wasn’t like you had a choice. You were either part of it, or you were a victim.”

July 1972, The Bronx, New York City, New York State, USA. Members of the Savage Skulls. The trademark of the, primarily Puerto Rican, gang was a sleeveless denim jacket with a skull and crossbones design on the back. Based around Fox Street, in the popular South Bronx neighbourhood, the gang declared war on the drug dealers that operated in the area. Running battles were frequent with rival gangs Seven Immortals, and Savage Nomads. — Image by © JP Laffont/Sygma/Corbis

The Sixties gave birth to Peace & Love alongside the civil rights movement and the war in Vietnam. Meanwhile the inner cities gave birth the radicalism and militancy of Black Panthers and the Puerto Rican Young Lords but in the Bronx and the other 4 boroughs of New York City simmered an unfocused rage. Neither law enforcement nor social agencies could end the escalating bloodshed between gangs like the Black Spades, Bachelors, Savage Skulls, Javelins, Reapers, Turbans, the Roman Kings et al.

However, a peace truce came about after the 1971 killing of Cornell Benjamin, a widely respected “peace counselor” from the more community conscious Ghetto Brothers which was led by the charismatic Benji ‘Yellow Benjy’ Melendez and Carlos ‘Karate Charlie’ Suarez. Both of whom are interviewed in the film and remain quietly distressed at the events of that fateful day. It was following a visit to the mother of Cornell Benjamin that led the Ghetto Brothers, who were initially bent on revenge, to organise a city wide peace truce, an serious event would change life for generations to come.
When it held, gang life shifted from turf wars to the block parties, hosted by the likes of Kool Herc and Afrika Bammbaata, that incubated the wild style of breaking, rapping and turntablism. 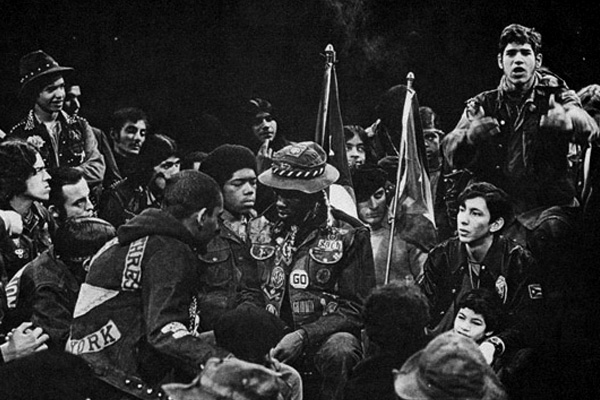 Benji Melendez addresses the Truce Meeting. Can you dig it!

Rubble Kings chronicles life during this era of gang rule and in one moment of clarity upon signingthat truce their leaders saw that when they stopped killing each other the medea weren’t interested in the real issues facing the youth in the city. The film tells the story of how a few extraordinary, forgotten people did the impossible, and how their actions impacted New York City and the world over. This what the director, Shan Nicholson, had to say about his documentary. 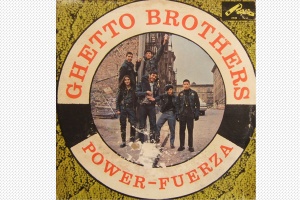 “I was instantly drawn to the story behind Rubble Kings. It was the backdrop to all I knew as a kid growing up in New York City during the 1980s. Hip-hop was my world- it was a movement growing on every stoop in every borough throughout the city. As kids, we would hear the echoes of generations past and the stories of the outlaw gangs that ruled the streets. Looking back, the tales seemed almost folkloric in nature filled with names like the Savage Skulls, Seven Immortals, and the Black Spades. We had no idea that these gangs played such an integral part in the birth of our generation’s song. Later in life, I started producing music and DJ’ing throughout the city. Record collecting became a daily ritual and on one of these missions, I ran into one of the holy grails of record collecting – a Latin funk album called “Power Fuerza” by the GhettoBrothers. Not only was the music amazing, their story would haunt me for months to come. The fact that The Ghetto Brothers chose peace over violence after the death of one of their own brother’s resonated with me deeply. I too had lost my best friend to an act of senseless violence. It shattered my world and here I was faced with this story of extraordinary courage in the face of adversity. I knew I had to tell this story.”

Enough said! Check it out. You can view it by pay to view or download online via Vimeo, amazon, itunes etc.