This collision between Chicago’s International Anthem crew and a host of London’s nu-generation-nu-jazz innovators was guaranteed to throw up some magical moments. At the helm of this project was EZH’s Tina Edwards (formerly Jazz Standard) and Scottie McNiece of International Anthem and from what I could glean it was made financially more feasible through some of the visiting musicians also doing sets at other venues in the area. In fact, I first caught wind of this wider exchange when I read, via Richard Williams’ Blue Moment blog, that Tomeka Reid and Mazz Swift of the stellar string trio Hear In Now were also featuring in Roscoe Mitchell’s Art Ensemble of Chicago residency at Cafe Oto. 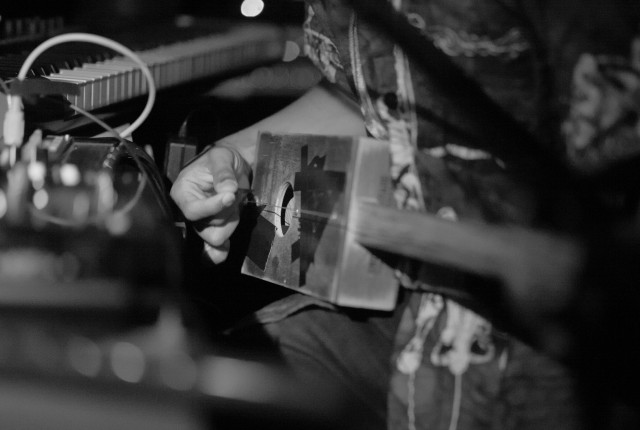 While the ambitious CHICAGOXLONDON programme incorporated structured ensemble sets there also appeared to be a strong element of pure improvisation. That terrain seemed mostly to be occupied by innovative modernist and drummer Makaya MaCraven whose set would provide the final offering on each of the two nights. As with most TRC based events the crowd were tuned-in and supa- receptive. The first night gradually kicked off around a shape shifting set from urban griot Ben LaMar Gay of the excellent Bottle Tree who “DJ’d” adding cornet and single string “diddley bow” to the mix. We were then treated to a free flowing opening set from feisty Chicago based trumpeter Jaimie Branch who offered a taste of the skill level that our American counterparts are capable of – especially if they’ve been schooled the shadow of the AACM. Taking material from her appropriately titled ‘Fly Or Die’ LP she took us on an explorative journey where she was more than ably assisted by an excellent drummer of Puerto Rican origin and the sweet rapport between her bassist and the mesmerising cello excursions of a dreadlocked Tomeka Reid. One mighty moment occurred when both Branch and Lamar Gay suddenly appeared the midst of the crowd trading spirited horn licks while one Angel Dawid, elsewhere in the crowd, delivered sweeping and soaring runs on the clarinet. The bar had been set high. 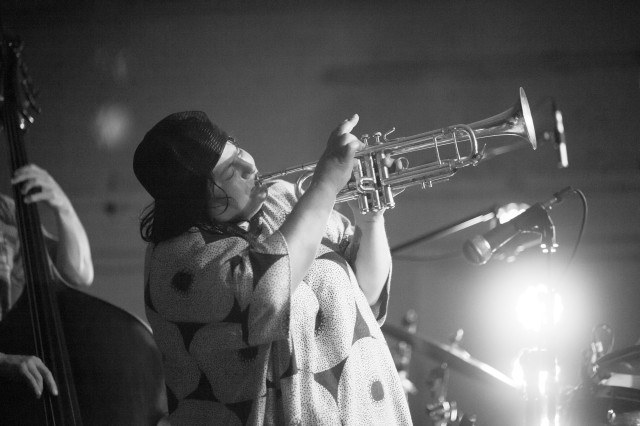 The next set arrived in the form of the mighty Theon Cross on Tuba, Nubya Garcia on tenor and Moses Boyd on drums. It was a stellar line-up with tantalising potential. Clearly intent on rocking the TRC Theon blew the house down. However, while this scribe felt that the trio didn’t quite gell the Comet Is Coming energy levels emanating from the stage had the crowd fully vibed. The final set of the night which featured Kamaal Williams on keys, Soweto Kinch on alto and voice and Makaya MacCravon drums also elicited a wave of high expectations. While the set didn’t reach the improvisational heights I’d envisioned the trio’s groove went straight to the dancing feet of a fellow scribe who was stood next to me – she simply informed me later, “That’s how the new generation bring it…”.

Stepping out in the night I was fired up and ready to return for another session the following night. I was not to be disappointed. First up came Hear In Now and that was a compositional and improvisational treat. These three bold women hunkered down onstage in close proximity to each other. They clearly “enjoy each others company” – as violinist Mazz Swift confirmed – and their music along with their explorative individual solos produced an unspoken, intuitive sense of communication and conversation. Who in the house could not love a ‘Prayer For Wadud’ – dedicated to the legendary cellist – or the reflective piece on their sad departure from Livorno in Tuscany – the home of bassist Silvia Bolignesi? All credit goes to the TRC audience who wasted little time in producing a hushed silence throughout the room. There was a lot of listening going down – both nights! I definitely needed to hear more from this trio and immediately snapped up a copy of their CD.

Pianist Ashley Henry and his RE:Ensemble posse followed and took us onto more familiar London terrain. This set progressed way beyond his ‘5ive’ debut EP/LP on Jazz Re:freshed and was joyously diverse. The excellent rhythm section of Dan Casimir on bass and drummer Eddie Hicks held it all down allowing Henry free range on keys while simultaneously providing a launch pad for some blistering solos from tenor-man Binker Golding. Add the vocals of Chemise Adams-Burnett and the spoken word of Anthony Joseph to the mix and you get the picture.

The final set of the CHICAGOXLONDON sessions saw Makaya MacCraven united with Theon Cross, Nubya Garcia and Joe Armon-Jones and what a set that turned out to be. From the get-go Makaya was diggin’ deep ‘n’ funky pushing his collaborators to step into the affray. While Nubya smiled to herself, stepping to the rhythms, listening and reflecting, it was keys player Joe Armon-Jones who tugged his hair back and locked his vision – his focus – on the drummer opposite him. A mesmerising conversation unfolded and Theon Cross wasted no time in getting involved. The subtleties of his playing contrasted nicely with his set the previous night. He added both rhythm and textures that gave Nubya the opportunity to conjure up some of the most inspiring and engaging tenor solos of the whole event. Makaya is a powerful and inventive drummer whose lexicon draws on host of contemporary styles including ‘broken’ and drum’n’bass and both player and audience were taken on sweat inducing journey that maintained a thrilling but intense momentum. It was Makaya’s birthday, he was having fun and the result was epic.

All the show’s were recorded and in the days after the session were chopped up and re-mixed to be presented a TRC DJ session on the Saturday night. I missed that but I suspect those tapes will surface in one form or another in the very near future. Can’t wait.

Above:TRC – The audience… The calm before the storm! Pic: Petra Eujane