This interview with curator Jonzi D and MD/saxophonist Jason Yarde was done by Straight No Chaser scribe Tom Tidnam for #SNC99 but production dates slipped by and the mag was not gonna drop before the May Bank Holiday… so, here it is!!

Reflecting on 15 years of Breakin’ Convention, the hip-hop dance festival held annually at London’s Sadler’s Wells, its Artistic Director – and pioneer of hip-hop theatre – Jonzi D acknowledges that such an event was, at the time of its conception, pretty unprecedented. Despite this, he notes that “15 years down the line, we’ve seen how hip-hop dance theatre is affecting contemporary dance generally…now, artists who come from hip-hop as a practice are doing work that’s hard to define as hip-hop…it’s very theatrical, exploring different styles, like classical music.” He stresses, however, that despite the festival’s broadened appeal, he is “keen to maintain the audience, because it’s changed so much over the years…the traditional Sadler’s Wells audience feel comfortable absorbing hip-hop now, and middle-class, white folk go in their droves… you often get what seems to be a lot of non-hip-hoppers peering into the culture – this year, we definitely want to address that.” Potential ambivalence about this aside, to Jonzi, the benefits are clear, with “hip-hop (now being) taken seriously as an artistic medium and an artistic discipline, allowing us to stretch our understanding of what hip-hop can be”.

Expanding this understanding of the art form has always been on Jonzi’s agenda. 15 years ago, he says “hip-hop was suffering from a lot of stereotypes about gangsterism, which wasn’t truthful to my experience of hip-hop culture – Breakin’ Convention challenges those ideas.” This approach and ethos, centred around questioning assumptions about genre and audience, is shared by Jazz Re:freshed, also celebrating their 15-year anniversary and bringing their specially commissioned Jazz Re:freshed Sonic Orchestra together for the first time to perform at the festival.

Jonzi and musical director Jason Yarde credit Jazz Re:freshed with rewriting the rules of contemporary jazz and expanding the scope and influence of the UK jazz scene. Jason, who has been involved with Jazz Re:freshed since its conception, praises them for “flying the flag for UK jazz in a way that’s not been done before” and agrees that the pairing makes sense: “hip-hop and jazz is not a new marriage”. For Jason, the opportunity to get a roster of fresh jazz talent working alongside a varied selection of dance troupes – including Boy Blue, The Locksmiths and The Ruggeds – was a uniquely exciting one. “Jonzi’s always trying to take this hip-hop talent from around the world and give it a platform” says Jason, “and we’re lucky at the moment, in terms of jazz, that there’s a lot of young musicians who are really into it, finding their voice and making their way, with more young people appreciating it”. The connection with young musicians is key to this, according to Jason, as Jazz Re:freshed has “fostered different players and different audiences…if you don’t keep on the people doing new things and trying to push things forwards, then things can stagnate”.

Nurturing young talent remains a key motivation for Jonzi – “we were all young once, and we all felt that we needed doors opened for us…it’s important that we’re constantly aware of what young people are doing and how we can provide platforms for them.” As for Jonzi himself, the drive to create remains strong, and he is devising a new work to be performed at this year’s Breakin’ Convention, a poem whose subject matter he is keen to keep under wraps. He does, however, offer this hint: “all my work is political, and if the arts aren’t political, then we’re gonna have to rely on politicians and we can’t do that now, can we?” The ambition inherent in this statement is evidence that there remains in Breakin’ Convention a desire to push the boundaries of what hip-hop, contemporary dance and live music can address, how it can be expressed and who it can speak to.

ALSO: The Jam In The Park…. 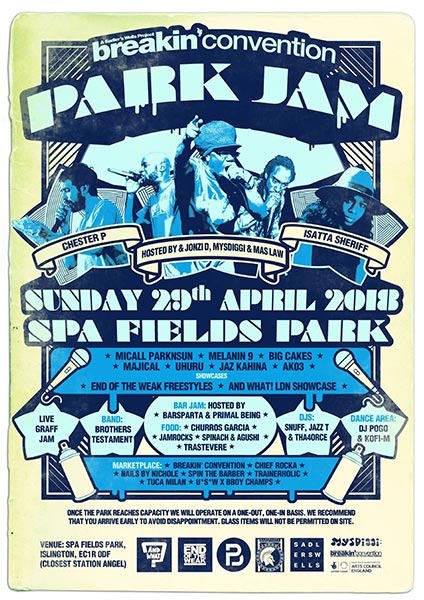