WOMAD is 30 in 2012 and while other festivals have gone to the wall this summer WOMAD has succeed in growing!

WOMAD is a mind expanding but relaxed affair that delivers an amazing spectrum of music and embraces an incredibly wide age range – from toddlers to pensioners! It seems like yesterday that I, along with a posse of friends, all WOMAD regulars, were pushing our kids around in their buggies. However, today, those kids are in their teens and looking out for global sounds that mirror their own urban realities. While the inclusion of Submotion Orchestra, Nextmen, Mungo’s Hi-Fi, Kitty, Daisy & Lewis went down well with the youth crowd, I’m convinced WOMAD needs to go deeper into what’s happening on the ground and refine their future programming in order to nurture this potentially new generation of global music devotees.

For an overall review of WOMAD – Dub Colossus, Afro Cubism, Axel Kygier, Baba Maal, Penguin Cafe Orchestra, Aurelio, Abigail Washburn, CW Stoneking, Le Trio Jobran, Submotion Orchestra et al – I’m going to refer you to http://www.mondomix.com, where I share the honours with fellow scribblers Jody Gillett, Max Reinhardt and Harry Johnstone. That said, I’ve pulled out a couple of my fave moments and used them as captions to the photography of the most excellent David Corio , which he has kindly donated to Ancient To Future.

Saturday 6pm: Fatoumata Diawara is wise to shun the image of the Malian diva perfected by her memtor, Oumou Sangare. She strapped on her electric guitar and gave a conscious and spirited performance that addressed issues of war and orphaned children. She even called for a woman president in Mali. The polish and sheen of her debut LP, ‘Fatou’, was displaced by a raw energy generated between Fatou, her band and an adoring audience. It rocked! 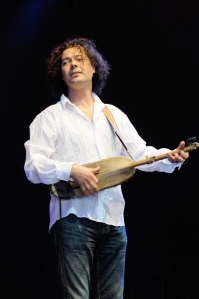 Walking past the workshop in the All Singing All Dancing tent we a were drawn like moths to the flame by stirring vocal harmonies and percussion of Danyel Waro, a cultural activist from Ile de Réunion. It provided a taste of his music and guaranteed that we’d check him out late Saturday night. Ile de la Réunion is a French territory in the Indian Ocean east of Madagascar and Wayo is known for his resistance against French colonialism. He did prison-time for refusing to do national service and his band plays rebel music – Maloya – which has its origin in chants of enslaved workers on the sugar cane plantations. The intensity of the workshop experience was inevitably magnified as the powerful call and response vocals in Creole meshed with deep harmonies and the rhythms of hand drums and self-made percussion. A potent force in the struggle to reassert their own identity, Maloya has the serious similarities with the rhythmic power of Haitian Vodou.

above: University Of Gnawa

SUNDAY: Following a midday musical brunch in the form of Louisiana’s Savoy (pronounced “Sovoir”) Family Cajun band came the much anticipated Umiversity Of Gmawa. Despite a shattering overnight journey from Portugal, Aziz Sahmaoui and his crew, took no prisoners. This 5 piece fused chanted vocals, tight bass lines and compelling rhythms skillfully delivered on hand drums, an upturned calabash, caxixi and metal castanets. Aziz shone on ngoni and oud and his experiences in Orchestra De Barbes and as a percussionist with Joe Zawinul, underpin a vision that shone through on his mentor’s ‘Black Market’.

(The University Of Gnawa’s esteemed producer, Martin Meissonier, informs us that the album is out in the UK in September!)

Basically, the sun shone and we were blessed with a multitude of fine musical moments that will ensure we’ll be at WOMAD 2012.

CONTACT or CHECK OUT David Corio’s photography at http://www.davidcorio.co.uk/
plus here’s a couple of his books: