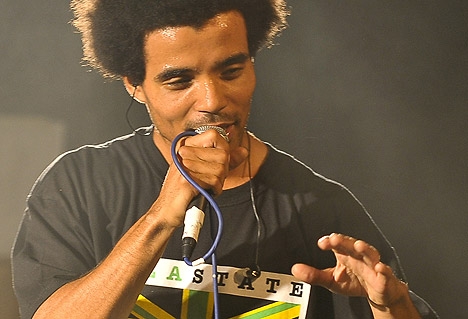 A blazing beacon of cultural enlightenment emerged from beneath the post-riot smokescreen in the form of UK MC, Akala’s ‘Life Of Rhyme’ on Channel 4. Following on from Saturday night’s well publicized but low budget and lame ‘How Hip Hop Changed The World’ came this unpublicised slice of pure inspiration.

By chance, I met Akala, one evening last year, just before an ill-conceived sound clash at the Roundhouse. I didn’t know who he was but he had clearly served his time in the north London hip hop scene, was working on his third album, ‘Double Think’, and on spoken word projects with the youth. He was well traveled and deep into esoteric ideas and spiritual matters. I was impressed and quietly enquired who he was. The answer was, “Akala. He’s won a MOBO, runs The Hip-hop Shakespeare Company and he’s Ms Dynamite’s brother.”

So, when I saw he had a TV doc. coming up I was excited but wondering whether TV would blunt his intellectual but streetwise rigor. ‘Life Of Rhyme’ was totally compelling and beautifully constructed. It was immensely relevant to the previous week’s events and was a proud and intelligent look at the lyrical art of MCing in the UK. Akala took an art from that has been demonized by the press and politicians and to counter their assertions he simply introduced us to a succession of London’s grime and rhyme dons who immersed us in the craft, in the poetry, the skills of delivery the grimey realities and the music. The 16 Bar performances from were Rodney P, Malik et al were genius. Don’t sleep on this. You can still catch it on 4od. Pass the word.

AS A BACK UP to ‘Life Of Rhyme’, dig out Dan Hancox’s impressive piece in the Guardian: Rap Responds To The Riots: “They have to take us seriously”.

This excellent piece of journalism took the accusation that British urban music has been promoting a culture of entitlement to leading Grime artists like Professor Green, Lethal Bizzle, Wiley and co. and gets them to illuminate a world that politicians can’t wrap their heads around and explain how grime is helping to give that world a voice. Read this piece and then tell me you’re not interested in what these guys are doing.

Along with some valuable and reasoning we get a journey through the music al and lyrical landscape. From Giggs’ nihilistic “road raps” to Real’s ‘Talk That’ – which Hancox declares, “eerily prophetic all of a sudden, a grim answer to the questions so many are now asking – though too few will hear.” There’s also the incisive and moving spoken word of Genesis Elija and if you check ‘I predict A riot’ you’ll discover that Reveal’s whole second verse was written from his Twitter comments outside Tottenham police station on that explosive Saturday night. Top read.