7AM Tuesday morning… Da Bei Qigong under the eaves of a building in Myers park. When it rains it Aukland it rains. Things were about to get busy!

The PIYN project was scheduled to kick off at Bizdojo at 10.30am and there were 25 people registered. The initial idea for the project materialized when I first met Gareth Farry in London. He was on a scouting mission and I was interested in doing a project that united various disciplines that would result in a some kind of publication. The prospect of holding a “master class in creativity”  was a little daunting, especially as we had no real idea as to who we were dealing with but, as Swifty and myself had worked on Straight No Chaser with an ever shifting, diverse group of contributors  I felt we were primed to pull this off.

I’d  emailed in advance a bunch of comments /questions to those signed up for the session. The intention was to set loose ideological and cultural perameters but in reality the project would be defined by those involved on the day. That said, the main thrust of the project would be to produce a goodie-bag of stuff without the aid of new technology. Everyone, including ourselves, were to operate outside of our comfort zone.

At Bizdojo we all crammed into the glass box of a room and everybody introduced themselves.  In the mix was Jason – a creative refugee from Farnworth in Lancashire, Amanda a food forager and “doer” , Jason and Sanya – graphic designers, Steve, Kate & Greg (photographers), Tosh – Cut Collective, Nadine – designer, Jeremy – zine producer/blogger, Tessa ( printer) … it was mixed crew and  I was somewhat relieved that the full quota of 25 had not materialised. To illustrate the lo-fi task at hand, Swifty & I  showed them early editions of Straight No Chaser, original punk fanzines from 1977 like Sniffing Glue, 48 Thrills and Ripped & Torn, old NME’s, early copies of The Face and other mags we’d brought with us. 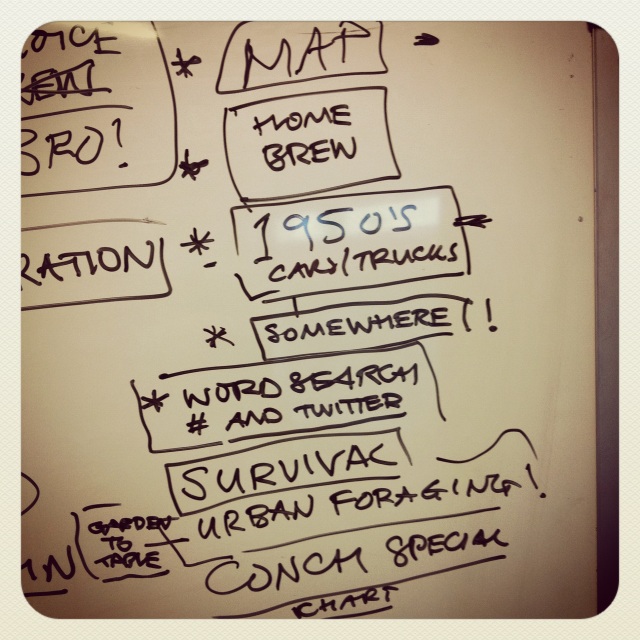 We then hit the white board. We needed a name and I believe it was Tosh from Cut Collective who came up with Yea Nah… a common colloquial saying in the city. Swift immediately pounced it’s logo potential. From there we explored the potential of doing a map –  a job that ironically fell to an out-of-town Brisbane based zine-head called Jeremy and a local wood-cutter Tessa (who also took on the logo). A swathe of issues were discussed and kicked around people and gently nudged into taking on various stories and generating images. Phew! Heads were reeling at the of that day but we were confident that we had the bones to build on.

Jeremy gets busy on the map

From Bizdojo it was back to Conch for the evening session. While Swift got busy I got chatting to Mark James Williams aka  ‘Slave’ from Fat Freddie’s Drop.  He told me the story behind the ‘Singalong with the Yoots’ LP and how, with the permission of the Maori elders, they taken the traditional songs that all New Zealand kids learn at school and turned them into  ska instrumentals. He described The Yoots  debut gig in a school with Lord Litchfield bashing away on the school piano, the Maori kids dropping the songs on the ridim and doing the Maori dances. The scene had brought tears to his eyes.  I immediately asked him to write it up for the ‘Yea Nah’ mag. Top story!

That evening we stepped next door to do a interview with Recloose and George Booker on the Hit It & Quit It radio show. Also in the house was another Londoner, Bill Brewster, who had penned the book A DJ Saved My Life. 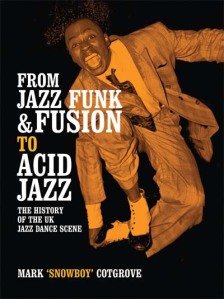 Unfortunately, I had recently  discovered that Bill’s DJ History website had slated Mark ‘Snowboy’ Cotgrove’s book, ‘From Jazz Funk & Fusion To Acid Jazz: A History Of The UK Jazz dance Scene’ . As I’d published Snowboy’s book I was seriously irate that it had been casually dismissed without any discussion on the remarkable history that Snowboy had painstakingly documented. Basically, it was disrespectul  fuckeries and I wasn’t sure how to deal with it! In the end, rather than confront Bill there and then I decided to let it ride. It would definitely would have marred his trip and, more importantly,  distressed mine! The last thing I needed was a serious dose of negative vexation.

Having championed Matt Chicione aka Recloose in Straight No Chaser it was indeed a pleasure to meet the Detroit techno don in person and take part in their radio show. He’d left the Motor City and settled in Aukland after successfully applying for the post of  project leader on  the DJ EMP – Dj’ing and Electronic Music production course. – at the SAE Instute. Wow! Another wicked story which I immediately allocated to photographer Jason Kyle. It was definitely coming together but the next day’s sessions at Alphabet City and Cut Collective would prove to be a make or break. Would have enough copy?

Pics in the distinctive funky curved corner frames are by Swifty instagram!