It’s  a freezing cold Sunday night and as I waited at the bus stop, weighed down by a bag of vinyl, I had to wonder who would brave the weather and venture to Hoxton for the launch of our FREEDOM session. Conceived by vibes-master Orphy Robinson and myself FREEDOM is a Jazz Warriors International production that resides alongside their other Sunday evening sessions at Charlie Wright’s International Bar. Inspired by the bold visions of the AACM, St Louis Artist Group, Tribe and Sam Rivers’ legendary Wildflower Loft sessions, amongst others, the essence of the session is pure improvisation and the form it takes is a jam. Basically, FREEDOM goes where the spirit takes us.

Initially, the troops were a little thin on the ground but as the first set gathered noisy momentum other players began to drift in. Darren Taylor’s subliminally funky electric bass lines were at the epicentre of a storm that built around Steve Noble’s drums Doug Boyle’s electric guitar, Orphy’s cascade of sound from his xylosynth and pristine flurries of flugel horn from Claude Deppa. We were off to fiery start.

Tori Handley arrived her harp on wheels and the irrepressible Jessica Lauren dropped to guest on piano in between sets with another band at a nearby venue. Harmonica toting genius Philip Achille, who’d blown us all away at the last Black Top gig, dropped in along with original Jazz Warrior and one-time Metalheadz mic-man Cleveland Watkiss.

Interestingly the presence of women players like Helen McDonald on vocals, Sue Lynch on tenor and Caroline Kraabel on alto, along with Tori on harp, shifted the vibe and a more open but no less fluid sound seemed to emerge. With such a diverse selection of instruments in the house Orphy was able to orchestrate several fascinating combinations including a memorable duet between Tori and Cleveland.

Initially slumped into a large armchair soprano player Adrian Northover traded licks with the other sax players who occupied the space in front of the small stage. However, the warm, muscular melodies of seasoned improviser Claude Deppa were never far way. As the night evolved the room was charged with a fresh and vibrant energy and the set culminated in a crescendo of sound with all thirteen musicians onstage. The foundation was laid and we were left on a musical and energy high that will carry us through to next episode of FREEDOM. 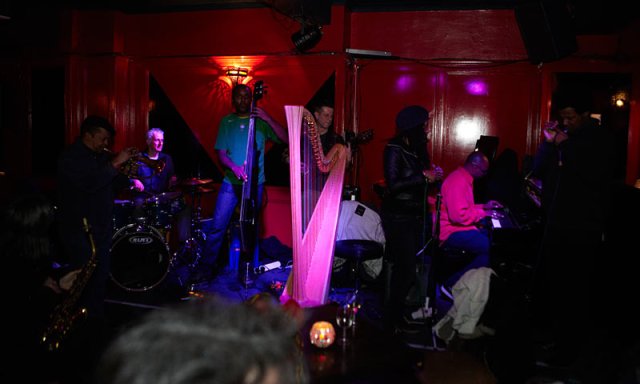 ALL PHOTOGRAPHY BY ROGER THOMAS © All Rights Reserved