Wow, here’s one project that has to be checked… following on from a radical all star performance at the Royal Albert Hall in aid of a cancer charity,  Gearbox Records has anounced the release of the ‘All Star Jazz Poetry SuperJams’ featuring Michael Horovitz, Damon Albarn, Graham Coxon and Paul Weller … it’s on vinyl – 3 the hard way – and it’s released on Record Store Day 20th April 2013.

OK, first up comes the album ‘Blues For The Hitchhiking Dead’ which delivers a radical collection of early Sixties,  CND/Ban The Bomb era experimentalism that united two of the finest performance poets of the day with the sounds of  jazz. 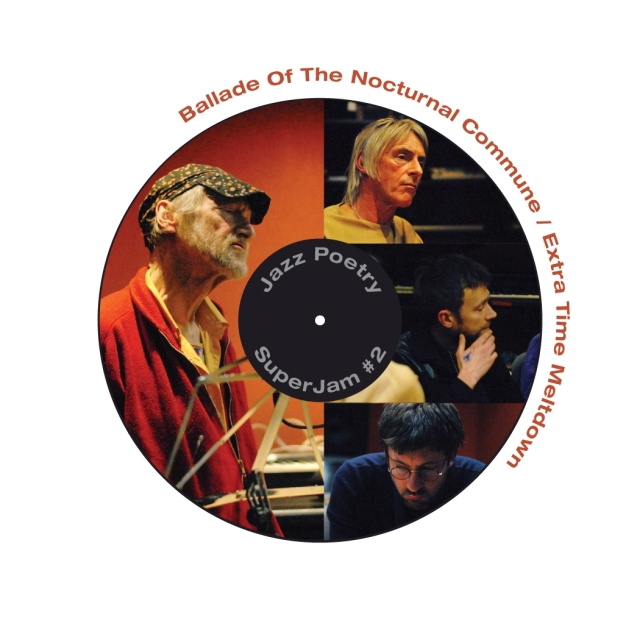 It was back on 12th March, 1962 that The Live New Departures Jazz Poetry Septet – performed a seminal gig at the SCR Students’ Building on the Southampton University Campus.  The Septet featured amongst others, the very fine Stan Tracey on piano and saxophonist Bobby Wellins alongside poets Michael Horovitz and Pete Brown. Today Michael is still regarded as Britain’s Beat Laureate while Pete Brown achieved global recognition via the lyrics he penned for Cream.  The session ranged over post-bop jazz, straight ahead poetry, sound poetry, solo and exchange jazz-poetry, as well as a dynamic rendition of the Septet’s most ambitious piece  ‘Blues For The Hitchhiking Dead’.

Michael H back in the day @ The Royal Albert Hall ( I think!)

The magical events of that night were captured on a reel-to-reel tape recorder by the artists’ friend Victor Schonfield. So, lucky people, to celebrate Record Store Day Geerbox records  are poised to release – for the first time ever – as an individually numbered box set containing two 180gm 12” vinyl LPs and a deluxe cornucopian booklet containing photos, reminiscences, reviews, essays and memorabilia. 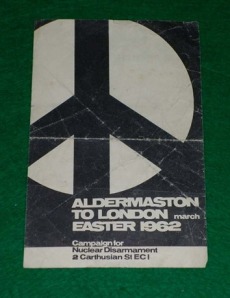 My dad went on this one!Respect!

Listening to the ‘Blues…’ again, the first thing that hits me is the fear,” says Pete Brown of the original recording. “This was the most dangerous known period in history for a potential nuclear war, and we really felt it. The next thing is a strange mixture of innocence and wisdom. Being very young, we had the innocence, but where we got the wisdom from beats me. A clue might be that some of the echoes are strangely biblical – not quite so strange when you take into account Mike’s Hasidic background and my Jewish grammar school semi-education.

“The poem comes across now as a kind of tour of real historical and imaginary Britain in the shadow and blast of the Bomb,” Pete continues. And of the music he adds, “A lot of the writing techniques are driven by jazz and our love of it, and certainly during the shorter “chase” choruses there is improvisation even between Mike and myself. In those bad days of primitive sound systems (particularly hazardous for jazz and poetry) we really were listening to each other. Musically there is enormous sympathy between the musicians and in support of the poets. The musical atmospheres created surround the words and complement the emotions.”

In conclusion Pete issues  a cautionary word of warning, “This may be a piece of history, an antique even, but it still has a lot to say. And we are by no means out of trouble yet.”

Half a century on from the beginnings of his public & jazz poetry mission with ‘Blues For The Hitchhiking Dead’ et al, Michael Horovitz remains as active and inspirational as ever, composing & performing new poetry, songs & music, publishing New Departures anthologies and staging multimedia events. So, it’s brilliant to hear him united, on these brand new recordings, with Damon Albarn, Graham Coxon and Paul Weller.

The tracks were recorded at Weller’s Black Barn Studio and Albarn’s Studio 13, then mixed at Studio 13  and of these sessions Paul maintains, “It was my absolute pleasure to work on these recordings with Michael, Damon and Graham. I am a big fan of all three of these artists and just to be so free with all the music and ideas was a real buzz. A lot of fun and no egos in the way. Fabulous. The end results are amongst some of the best things I’ve ever worked on”.

It’s also clear that both Damon and Graham adored the whole process involved in making these records and Michael himself could hardly contain his delight.

“… Paul & Damon, long standing comrades in personal and artistic collaborations, were both equally enthusiastic about the prospect of jamming with one another, Graham and myself. They had not ever played together before. Graham and Paul had dug one another, and Graham is featured on Paul’s recent ‘Sonik Kicks’ album – which also included the text of my ‘Bankbusted Nuclear Detergent Blues’ which Paul had commissioned me to write. So I stretched out in free form rhapsodies with the entire Paul Weller story in mind. When it came to the recording of this, along with my rural songpoem ‘Ballade Of The Nocturnal Commune’, and the more polemical off-cut from ‘Bankbusted’ – ‘Extra Time Meltdown’ – the three of them connected with the verse and each others’ responses to my performance of it with scintillating flights of harmony, dissonance and poetic improvisations way beyond even my fondest hopes of co-warbled woodnotes wild”.

And there we have it. Don’t you just love new departures! 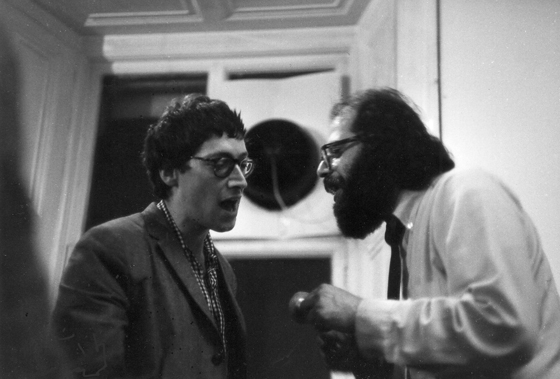 Couldn’t resist popping in this shot! Not related to the project but of the time!! Michael Horovitz & Allen Ginsberg. Photography by Peter Whitehead