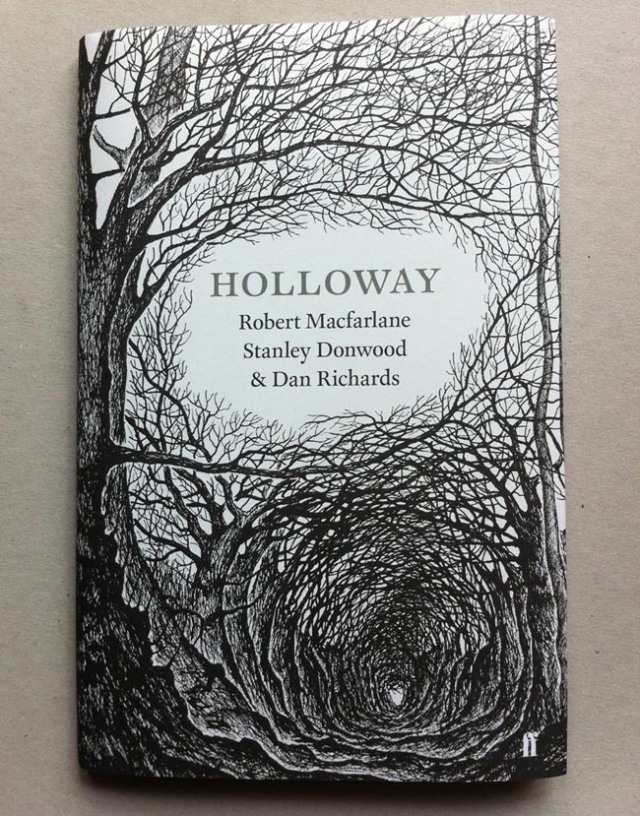 Earlier in the week I braved the rain and headed off to Rough Trade East for the second launch of Holloway – a lovely little hardback volume that unites the words of Robert Macfarlane and Dan Richards with the evocative monochrome drawings of Stanley Donwood. I’d pre-ordered the book online as it was hot off the press that day and felt a little tinge of excitement as I skirted Hawksmoor’s Christchurch Spitalfields and headed for Drays Walk. A buzz on a book. Odd.

Upon entering the shop one was greeted by Stanley’s ‘Emerald Holloway’ – an expansive 4 x 2 metres piece constructed in several panels. Apparently, you could buy it but you had to take it way yourself. At the counter I found Caught By The River‘s Jeff Barrett enthusing to Andrew Weatherall about Jessica Pratt, Thee Oh Sees and musing on Count Ossie’s version of ‘Way Back Home’. To my delight, Rob Gallagher also appeared and we both agreed that his and Demus’ Suffolk rooted William Adamson recording seemed nicely in tune with this event and the Caught By The River ethos.

Stanley Donwood along with Cefmor Tallboy had set up in the back corner of the shop and were encouraging the curious to print their own commemorative poster on a proofing press… which I did and felt rightly chuffed with the result. In fact, as I pulled the roller over the block the final clunk punctuated the opening words from Dan Richards who proceeded to pay his respects to the late Roger Deakin, the writer, environmentalist film-maker, broadcaster and swimmer to whom the book is dedicated. Dan explained how the initial letterpress limited edition (270 copies) of the book had inspired Faber to take it on board and then read aloud a piece he’d penned for The Quietus.

Holloway – the book – recounts a journey that followed on from Robert Macfarlane and Roger Deakin’s initial foray into south Dorset. It was in September in 2011 that Robert, Stanley and Dan traveled to same spot in search of a holloway.

“The three of them stood looking out into the void, gazing in the approximate direction of the valleys of the holloways. But there was nothing there, only wraiths, only shadows. They descended from the hill fort, feeling their way, each yard of country having to be uncovered, and all the while followed, haunted by silence.
Towards the close of the day they perhaps found the hollow way which they had been looking for. The everyday had gone, and night was falling swiftly. Things began to happen secretly around them, and the past conspired with the present, and those that had found the holloway before them were part of that present.”

Another link in the chain that connects us to Holloway is Geoffrey Household’s classic 1939 thriller Rogue Male. It was this book that initially led to Deakin and Macfarlane to visit Dorset in search of the hide that the book’s nameless hero hews out of a Dorset holloway. And on this night, it was  down to Andrew Weatherall, who looked like a well inked,  fedora wearing, 21st century William Morris, to read the passage from the book where the main character does just that. I’ve since learned that in 1976 Rogue Male was a made into film starring Peter O’toole and was recently serialised on the radio. It’s now on the reading list.

In between readings were were transported out of the East end and into the Dorset countryside with field recordings made at dawn and dusk. Birdsong and gunshots! The readings culminated with a fascinating piece from the Caught By The River’s An Antidote To Indifference compendium read by its author, Malcolm Anderson. He’d grown up in south Dorset and while he had never heard the term “holloways” he was still in thrall of these hidden highways – the history and the mystery.

Outside it continued to rain and the slippery cobbled streets etched with the footfall of previous generations sparked thoughts of inner city “holloways” – well worn but now forgotten pathways once frequented by “dissolute, loose, and insolent people harboured in such and the like noisome and disorderly houses, as namely poor cottages, and habitations of beggars and people without trade, stables, inns, alehouses, taverns, garden-houses converted to dwellings, ordinaries, dicing houses, bowling alleys, and brothel houses.” 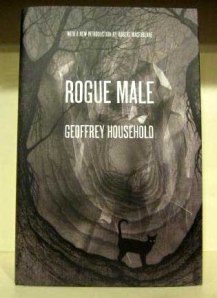 Here’s a very handsome hardback of Rogue Male with a Stanley Donwood dust-jacket. There are only 500 of them. It’s £12.99 – https://www.mrbsemporium.com/