Arts Foundation Awards: Spirit Of Innovation is alive and well in 2014 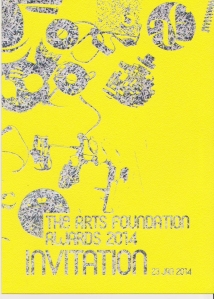 Last night, along with a long-time Straight No Chaser collaborator and Tokyo based stylist Naoki Toyama, I followed up an invitation to The Arts Foundation Awards, an annual even that has donated more than £1.5 million to artists since it was initiated in 1993. The 20th Century Theatre in Westbourne Park, which has a history dating back to Charles Dickens, was alive with anticipation as nominees for the awards along with their friends and family mingled with what appeared to be the good and the great of the contemporary arts scene in the capital. That said, it was something a relief to bump into fellow music scribe and photography critic/curator Sue Steward, flautist Emi Watanabe, improv-musician/composer Steve Beresford, and documentary film maker Molly Dineen.

I’d been made aware of the Awards by a good friend and one of the foundation’s trustees, Virginia Hodge, a celebrated Hoxton Square based textile designer who has been heavily involved in creating a new award that focused on Materials Innovation. A life-long music lover she, along with Jonathan Reekie, the current Director of Somerset House, also initiated the discussion which led to an award that focused on Experimental Music. That award category resulted in last week’s New Expermentalists QEH concert, featuring the four finalists Richard Skelton, Rie Nakajima, Jennifer Walshe and Lina Lapelyte. It attracted over 600 people and, as is the nature of such adventures in sound, it successfully generated the odd walk out.

The Arts Foundation Awards vary year to year and this year’s awards embraced sculpture, painting, materials innovation, playwriting, arts journalism and experimental music. Under the guidance of its chair, William Seighart and its diligent administrator, Shelley Warren, The Arts Foundation collaborates with the Lionel Bart Foundation and the Yoma Sasburg Estate. It gathers together a collective of heavyweight trustees and nominators, including sculptor Anthony Gormley, publisher Jamie Byng and former CEO of Aldeburgh Music Jonathan Reekie, to come up the various awards, initiate several judging panels and produce a shortlist of four innovative young practitioners in each category. 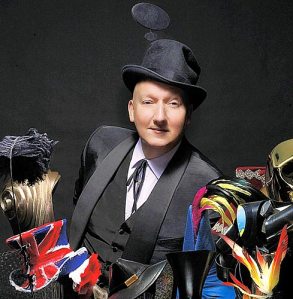 The shortlist booklet gave us a solid introduction to each nominees work but on the night it was left to various trustees and panel judges like radical milliner Stephen Jones and Café Oto’s Hamish Dunbar to give an incisive and passionate introduction to their respective specialism before handing over to the evening’s special guest, Oscar winning script writer Sir Ronald Harwood, to dish out a handsome award of £10K to the winner and a grand to each of the runners up.

It was good to see John Doran of The Quietus nominated for Arts Journalism though the award went to Isabel Barbison, a writer and critic whose recent opinion pieces in Frieze and Kaleidoscope-press have evolved into curatorial projects. Installation artist and sculptor Rei Nakajima is currently the associate artist at Café Oto in Dalston and she walked away the experimental music award while promising the create more. I’d have loved to have sat on the discussions of Experimental Music judging panel, which included Brian Eno, as the scope of musical innovation also spanned Lina Lapelyte’s intriguing ‘Candy Songs’ (which repurposes the sexist ranting endemic in much contemporary hip hop to devastating effect) and Richard Skelton’s inspired and sustained arrangements with place – primarily the landscapes of northern England. Mind blowing.

One had to be impressed those involved in Materials Innovation and while the German born winner Julia Lohmann vividly extolled the virtues of kelp… yes, seaweed… I couldn’t help feeling a little gutted for runner up Alkesh Parmar whose passion for sustainable materials had led him to patent a new process for transforming the huge amount of citrus waste, produced while making orange juice, into a versatile new material. Amazing!

Nicholas Wright’s leisurely and eloquent introduction to art of playwriting and it’s lack of financial reward prefaced an award to the meticulous poetic work of Alice Birch. The sculpture award went to a hugely grateful Leah Capaldi whose work explores the boundaries of performance and sculpture. Unfortunately, the person who was to present the painting award was a no show and left us all – especially the artists nominated – feeling a little short changed. It would have been nice to get the context. However, the images, the paintings of the winner, Andrew Cranston, left me wanting to see much more of this man’s work.

Andrew Cranston- Thinking Inside The Box

In a way, it was all over in a flash and we were left to reflect on a host of UK based artists many of whom have roots in the new Europe rather than the old empire. The Arts Foundation Awards is a celebration of the vibrant creativity that underpins our economy and culture and it stands in sharp relief to the destructive lack of vision displayed by the philistines and dullards who we currently allow to run this country.