?UESTLOVE IN HAVANA: Quest For Cuba

OKAYPLAYER FILMS PRESENTS QUEST FOR CUBA! A Mini-Documentary featuring ?uestlove as brings his own brand of funk to Cuba. This is the story…. WORDS by JAURETSI. 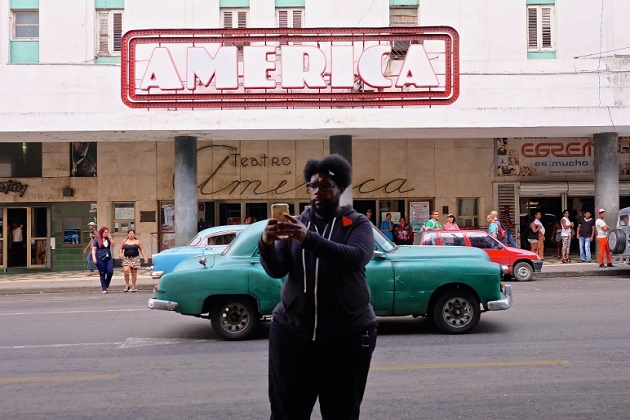 Yup. ?uestlove‘s Cuba trip finally gets the full mini-travel documentary it deserves. ?uesto made good use of his time in Havana, engaging in extensive cultural research both by digging up some classic Cuban-made vinyl and by visiting the legendary EGREM studios, where most – if not all – of those Cuban classics were recorded. Cultural exchange is a two-way street of course–in this case a narrow two-way street full of classic cars and beautiful people and lined by palm trees on one side and the waters of the Caribbean on the other. In that spirit, ?uesto also showed a cross section of party-goers how he gets down, delivering two nights of DJ goodwill at Fabrica de Arte Cubano. But as you’ll witness today, there’s much more to the story, including a brief cameo from Cuban Salsa group Azucar Negra’s dance crew and a chance reunion between ?uestlove and Cuban hip-hop artist Brebaje Man, who opened for The Roots when they played Havana in 2002. That meeting lead to a spontaneous freestyle and beatbox duet that is also one of the doc’s most hilarious moments thanks to one very vocal under-aged music critic (just watch to the end!)

These are the kinds of things, of course–incredible DJ sets, rare vinyl, deep studio history, unplanned street concerts–that we get excited about every day over here at Okayplayer. But we can’t escape the feeling that this particular weekend of incredible DJ sets and music discovery has a greater sense of emotion and, well, history, attached to it…coming as it does mere days after President Obama’s meeting with Raul Castro at the Summit of The Americas in Panama. So rather than further recap what you’ll see in the mini-doc, here’s a bit of the background you need to know in order to understand just how momentous what you’re seeing on the screen is.

EGREM is the studio where The Buena Vista Social Club recorded their albums, not to mention numerous other legendary Cuban bands including Beny More, Los Zafiros, Barbarito Deiz, Omara Portuondo,Los Van Van and Chucho Valdez (famous stateside artists such as Nat King Cole also recorded there). Due to the Cold War US Embargo, American artists have been forbidden to records albums with Cuban artists since 1959. Most forms of collaboration on the island violate America’s Trading with the Enemy Act, thereby resulting in large fines for Americans. To make the math simpler and more stark: These laws have effectively prohibited collaboration between Cuban and US artists for 55 years–laws that Obama and Castro have at least begun the groundwork to roll back, promising to open a whole new era in U.S.-Cuba relations.

After the Cuban Revolution in 1959, all Cuban culture, including the record industry, was nationalized. This means Fidel Castro shut down Panart studios in 1961 (originally founded by Cuban owner Ramon Sabat in 1944). Between 1962-64, it was renamed The Imprenta Nacional de Cuba and acted as the only legal label in Cuba. In 1964, it was re-named EGREM, absorbing the assets of Panart.

By the 1990s, young Cubans were creating illegal antennas improvised out of material at hand such as wire hangers and coke cans, mostly on the roofs of homes in Alamar, which happens to be the birthplace of hip-hop in Cuba. In spite of the embargo, the island was not totally isolated and American hip-hop, soul and rock continued to seep into the country through these guerilla antennas, spawning a mixed tape market in the process.

Against this backdrop, ?uestlove’s trip to Havana as an unofficial ambassador of stateside hip-hop looms large indeed, a welcome chance for music heads to exchange ideas as well as a pound–and hopefully a sign of great things yet to come. Much respect due to Productor n Jefe for the use of his music throughout, as well as his invaluable knowledge. Watch and enjoy below:

1 Response to ?UESTLOVE IN HAVANA: Quest For Cuba