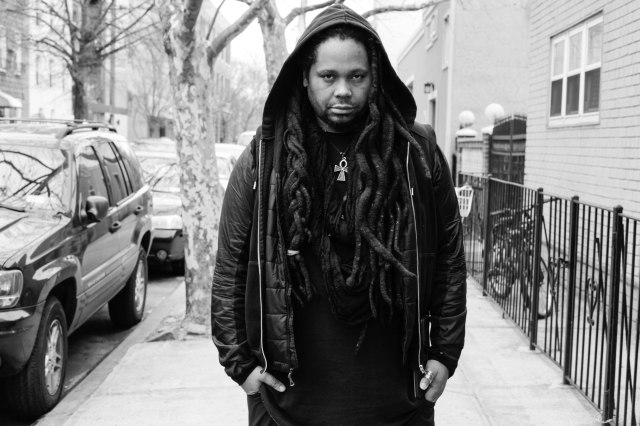 Hieroglyphic Being Pic by Celesete Sloman

New Years day 2016. Following on his 6 hour New Years eve DJ set at Café Oto Chicago’s Jamal Moss aka Hieroglyphic Being returned to Oto to perform a live, totally free, improvised set with Black Top’s Orphy Robinson and master drummer Mark Sanders. I had toyed with dropping in on the 6 hour session but this meeting of musical minds provided a tantalizing alternative. It was imbued with much promise and had the potential to set the tone for the year to come. I was not to be disappointed.

I first came across Jamal while editing Straight No Chaser. I was a regular online visitor to the Dope Jams site and it was there that I came across the name Hieroglyphic Being. It was a name that had echoes of Ra and the music had therefore to be checked out. Rooted in Chicago’s house scene he is a purveyor of electronic music, a DJ, a post space age explorer with a sound and word vision that corresponds to a digital age which conditions our existence.

Jamal is a big man who gives off air of inner solitude. From beneath his hood tumbles a waist length crown of dreadlocks. He hunches over his mixer as the others ready themselves. His right hand moves in the air and a theremin comes to life. Mark Sanders is a model of versatility and his crisp, fluid attack on the drums has a lightness of touch that allows Orphy Robinson to play with the settings on his xylosynth as he searches for a middle ground between the trap drums and Jamal’s increasingly intense bursts of static noise. As if getting the feel of each other the threesome gather a dexterous and furious momentum only for it to suddenly give way to a fresh undercurrent. Orphy relaxed onto his rumba box as Mark maintained the rhythmic pulse on a small repenique sounding drum while Jamal took flight on the Ewe. The ethereal collided with the cavernous… there were keyboard sounds that were familiar but you just couldn’t lock down.

“This is not my signal…. My transmission… it’s out of my control….” declares Jamal on the mic through stuttering delays before the music settles into compelling, sensitive cosmic groove that which culminates in a cascade of what sounds like chiming bells. Then, out of a haze of static… a fact…a warning?… “Everything…. everything… our lives… our loves… our messages… all stored on an external hard drive…”. End of Set 1!

Set 2 commenced with Jamal asking, “Chakras or I Ching?” The I Ching – a Daoist divination and cosmological text with a history of more than two and a half millennia won out and it appeared that Jamal’s choice of instrument for this piece was an i-phone which was wired into his desk and subject to hand held manipulation.

“Say this! We are the people. Say this …”
“It is worthwhile crossing great rivers….”
“Only cultured people can understand….
‘IMAGE. Assimilation.”
“Sky and Fire.”
“Cultured people avoid trouble by virtue…”
“IMAGE. Imagine.”
“Greatness is balance”

Just a few snatches I managed to scribble on a piece of paper, sentences randomly selected and read from the Book Of Changes as sound and rhythm is woven around them.

From the I Ching they move on to a celebration, an evocation, of computer games from Hatari onwards and then as it was a Friday night Jamal slipped into the session a 4-to-the-floor beat that one posse next to me had clearly been longing for. The constriction of ‘the one’ offered new challenges to both Robinson and Sanders who both worked tirelessly within the groove to offer a myriad of additional polyrhythms and sounds. They were clearly having a good time. I was most surprised to see that despite the beats Cafe Oto was pretty much a head-nod free zone. Weirdly intense. 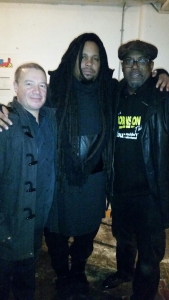 The set drew to a close with Jamal’s finger dancing across his I-Pad to conjure up sounds that came over like cross between kora and steel pan. Mark and Orphy both settled on mallets and got into a hypnotic but constantly shifting Malian style marimba/drum groove plus gongs. It was a mesmerizing climax to a wild, quite exhausting but energizing, journey into rhythm and sound that overall easily spanned two and half hours. It was all about the moment and I have to a give thanks to this supa-dynamic trio for kicking off 2016 in such a challenging and inspirational fashion.

For more from Hieroglyphic Being check: https://soundcloud.com/somuchnoise2beheard

PS. Along with the lack of head-nodding I also didn’t spot anyone filming on their phone! I liked that!