One of the first posts I did on Ancient To Future was a Kutiman video/composition that blew up on youtube. I’m a fan and a week ago I got a mail from Boaz Murad – Kutiman’s manager – hitting me up re. his new LP and a documentary film called PRESENTING PRINCESS SHAW. 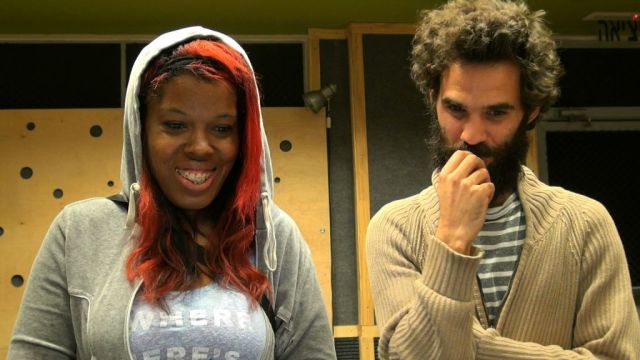 I downloaded the LP and then watched the movie online. I had no idea what to expect and I was blown away. The documentary has been made by Ido Haar and as I locked into this modern day musical fairy tale all could think about initially was Catfish. It had the same vibe. The core of the film is focussed on the mobile phone, youtube and the internet and there was also this sense of where is this going especially as one increasingly felt there was some kind of collusion going down that singer/songwriter Samantha ‘Princess Shaw’ Montgomery was totally unaware of.

Without blowing the whole story and ruining the film for you (like most critics seem to!) this is film about a hard working and aspiring singer from New Orleans who suffers knock back after knock back. Princess Shaw’s hopes are pinned on the short videos she posts on You Tube. Meanwhile, Israel based musician Ophir Kutiel aka Kutiman is busy trawling the web, comes across Princess Shaw’s heart rending YouTube Channel and discovers her soul searching, self penned songs. Kutiman is famous for sampling and making music out of other people’s music posted on the web and I have to presume this is where Ido Haar comes into the frame as he embarks upon making a film about her daily life under the pretext that he’s making film about Youtube-ers!

For Princess Shaw life is rough. It’s always been rough and it’s during a visit Atlanta and on the back of a very dark conversation about her childhood that the bright light of hope enters her life and it’s beamed into their living room via the internet. Princess gets a phone call from a friend who has spotted her singing her song ‘Give It Up’ on You Tube and we get to watch her reaction as the stats climb and it goes viral. Today, that video has had 2.5 million views.

On the back of that Princess gets to take time off from her day job in an old people’s home and leaves behind her car which is jacked up on bricks ’cause someone stole the wheels (it’s in the trailer! See below!). She travels to Israel where Kutiman is a don! She meets up with him and his posse on a kibbutz somewhere in the Negev desert and they prepare for a gig in Tel Aviv. A BIG gig that gives you an indication of Kutiman’s status within the Israeli arts community!

Man, I don’t know who shed the most tears during that film – me or Princess Shaw. It’s a modern tale that connects two starkly different realities. Her life and Kutiman’s are poles apart but together they have created something unique. For Princess her dream came true… she’s an internet phenomenon… but as the film draws to close you have wonder what comes next. Of course, there is the film – which has just been launched here – and even in the last couple of days the reviews are mounting globally. Despite the millions of You Tube views will Princess have to return to the drudgery and frustration of the day job or will she actually get to record and perform those songs she wrote? It seems like she will. Kutiman is currently poised to produce that first album… you might just have heard that here first… and I’m definitely vibed about that.