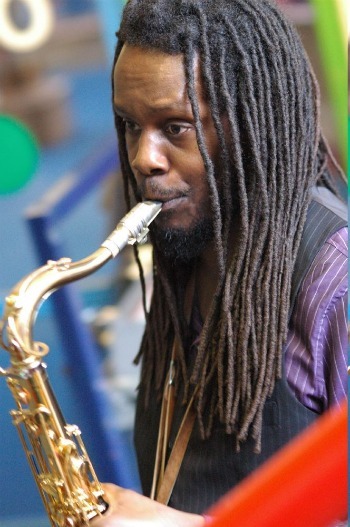 Steve Williamson: On a Journey to Truth.

Saturday night at the Purcell Room was a touch special. First of all, I need to give Gary Crosby a heads up for the work that he’s doing, as an artist in residence at the RFH, with the Tomorrow’s Warriors orchestra. The impressive pieces played in the first set, orchestrated and conducted by young players like pianist Peter Edwards, James McKay and saxophonist Binker Golding, took in Wayne Shorter’s ‘Dance Cadaverous’ alongside their own bold compositions and illuminated a deep rooted affinity to the tradition and a startling confidence. However, this was a game in two halves and as they launched into Jason Yarde’s arrangement of Steve Williamson’s ‘Soon Come’ you immediately became aware of a different, more radical and modern rhythmic sensibility at work. ‘Mandy’s Mood’, ‘How High The Bird ‘ and ‘Sweet Love of My Likeness’ followed and that left this listener with a lingering taste of Steve Williamson’s compositional depth. The set culminated with ‘Waltz For Grace’ – a moving song that reflects on the premature passing of Steve’s sister – and it brought onto the stage the elegant Studio 1 vocalist and JA’s “First Lady of Jazz”, Myrna Hague, along with the saxophonist himself. As Steve teased his soprano into the tune and Myrna sought out a point of entry, an inevitable element of improvisation crept into the proceedings and, much to their credit, it was deftly integrated into the Warriors’ complex arrangements. Following a riot of applause the night drew to close with just Gary and Steve refreshing a long-time musical friendship by dueting on Coltrane’s ‘Equinox’. Enough said!