ONE YEAR ON…. AFTERSHOCKS OF THE TOHOKU EARTHQUAKE

It’s one year on from the Tohoku tsunami and earthquake disaster and in the wake of the stirring images and stories that have reached us I am  more than hacked off with a bunch of pro nuclear power scribblers who are claiming that the disaster has been hi-jacked by the anti-nukes movement. 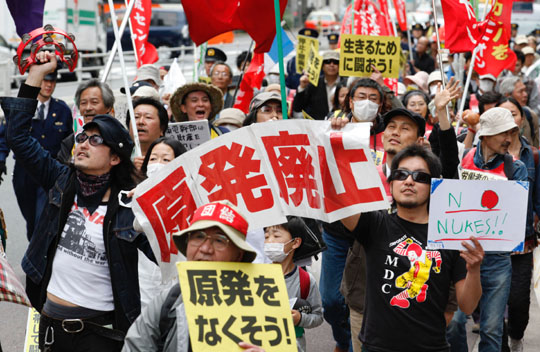 Their rationale is that 20,000 people died as a result of the tsunami but nobody has died as a result of the destruction at the Fukushima Daiichi power plant. On the surface that’s true but I’m also convinced that those workers who tried to get the plant under control in the early days of the disaster will pay the price. It’s more than bizarre that these pundits regard what’s gone on at the plant as a source of scare-mongering rather than an event with deadly long-term consequences.

Rather that get into a debate with those people, I would love someone to do a reality TV show where these journalist/commentators are transported , with their families, to live right on the border of the exclusion zone for 12 months. When  there, they will eat local produce (including the seafood) and their children will attend the  local schools which now have had the top soil removed from the playground.

Failing that I  need to refer one “journo” who smugly shrugged off the huge amount of radiated water that’s gone into the sea to the blog of a local school teacher – http://fukushima-diary.com/2012/01/live-minamisoma-blogger-ustream/ – who is clearly suffering from the effects of living in a disaster zone that has been rated alongside Chernobyl.

Like the TV footage of the Twin Towers, the footage of the Tsunami sweeping towns and its inhabitants off the face of the earth will stay with me forever. The pain caused by the magnitude 8.9 earthquake and ensuing tsunami will live on for generations in Japan. It remains shocking that today, in one of the world’s most affluent and developed nations, more than a quarter of a million survivors face up to five more years in temporary shelters.

The Asanuma family were driven by the tsunami from their family home in Ishinomaki, Miyagi, and have taken refuge in a temporary residence. Photography by Shizuo Kambayashi

We’ve all seen the photos where once the debris has been removed the only sign that a town once stood there are the patterns, etched into the ground,  outlining the buildings’ foundations.  The Japanese government is currently spending about $258 billion on rebuilding but despite this massive sum, a full recovery may not even be possible. If it is achieved, according to authorities, it will take at least a decade.

Alongside the physical damage and death toll we have the ongoing catastrophe of the Fukushima Daiichi power plant – which is still a source of half truths and mis-information. Basically, there is a war going on between those who are  pro and anti nuclear power and in that context I prefer to shelve TEPCO’s statements on the plant and listen to someone like Arnie Gunderson – a former nuclear power executive who served as an expert witness at the enquiry into the Three Mile Island Incident – via http://fairewinds.com/

Japan still suffers the consequences of America’s willingness to experiment with the impact of nuclear weapons of mass destruction and people are quite rightly fearful of the radiation from the Fukishima plant. That fear  has undoubtedly been compounded  by hundreds of violent after-shocks that have taken place over the past 12 months. However,  the Japanese people have shrugged off a reputation for political indifference and made their voices heard. The result of intense public opposition to nuclear power is that only two of the 54 nuclear reactors in Japan are currently in operation.

For us in Europe, the Tohoku earthquake disaster led several countries, including Germany, to stop construction on new nuclear plants. However, that didn’t stop the French  sending their Industry and Energy Minister Eric Besson to Japan on the anniversary of the earthquake.

The French are Europe’s  evangelists for nuclear power at home and around the world and in this cynical exercise Besson (see pic!) became the first foreign politician to enter the crippled Fukushima Daichi plant since the disaster. He informed one journalist  that nuclear power was too important a source of energy to abandon and told the workers in the plant they must revive atomic energy in Japan.

Basically, for the French, nuclear power is big business.  And that brings it all back home to the UK because according to the Guardian yesterday it looks like the UK is handing control of its energy future to France   http://www.guardian.co.uk/environment/2012/mar/13/uk-energy-future-france – and that’s not good…

The current situation in Japan demands we ask questions and demand answers. Nuclear power… is  it worth the risk? What are we going to do with all those spent fuel rods that can’t be recycled and will be lethal for 20,000 years + ? 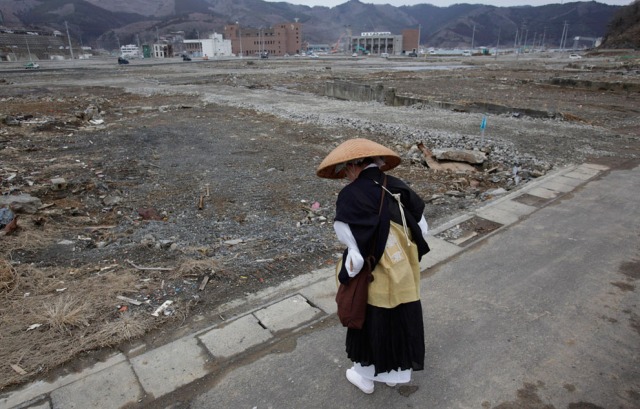 Buddhist monk bows and offers a prayer in a neighborhood destroyed by the March 11 earthquake and tsunami in Onagawa, Miyagi Prefecture, on March 9, 2012, two days before the one-year anniversary of the disaster. Photography by Shizuo Kambayashi

1 Response to ONE YEAR ON…. AFTERSHOCKS OF THE TOHOKU EARTHQUAKE