Drifting through Hoxton Square on my way to the printers I noticed that the White Cube had a show of works by Anthony Gormley. It was an enticing offer I couldn’t refuse. 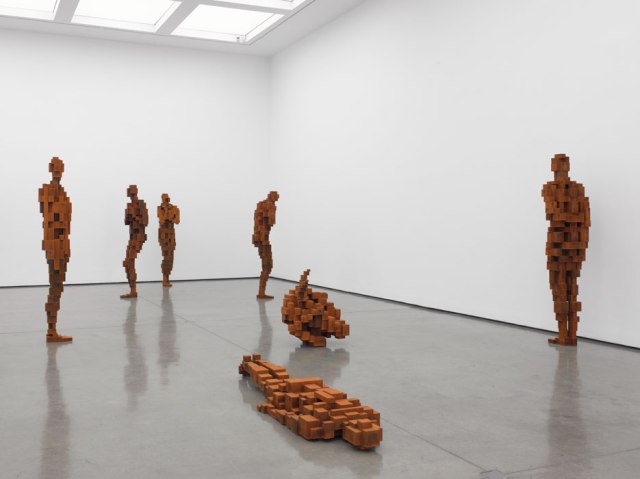 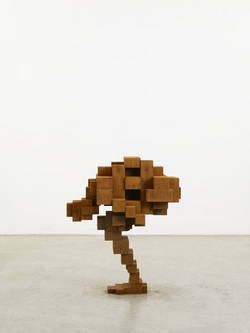 I’m definitely a fan and as I entered the downstairs space which is populated by seventeen figures I was totally hooked.  Each body was formed from rectangular cuboid blocks, stacked and jutting out at different angles. They are a warm rust colour and drip stained as if corroded over time. As one moved around the space you became increasingly aware of their character and Gormley’s  ability to create  then most subtle shifts in posture. 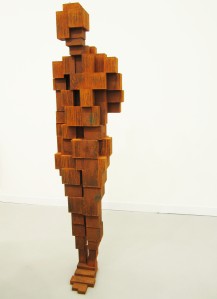 Up until recently,  the previously residence for these isolated figures was  in a grand columned space at St. Petersburg’s illustrious Hermitage Museum and  I felt I tinge of  privilege upon discovering them by chance in Hoxton Square. As with the works that the artist showed at the Hayward the Academician’s body shape and size is the scultor’s  starting point and he explores numerous stances. Arms are crossed or placed behind the head, some strain to stay upright, one is bent double while another is prostrate on the floor. One figure seems to simply disintegrate. Obviously, there are resonances of Cubism and Constructivism but it’s the pixel effect created by the use of blocks that instantly transports these physically powerful pieces into the digital dimension.

When I suggested to a fellow viewer that some figures appeared to be watching us he spontaneously recited an appropriate piece of verse. I thanked him for his poetic insight… I was totally knocked out

As a result, I failed to notice that there were more recent pieces on show upstairs at the gallery and another visit may well be on the cards. Otherwise I’ll have to wait until the dark days of November to roll in and the White Cube in Bermondsey hosts a major exhibition of the artist’s new work.