THIS THURSDAY at St George’s Bloomsbury THE JAZZ WARRIORS INTERNATIONAL/Nexus celebrates the life of suffragette EMILY DAVISON – an unrepentently militant activist who, on June 4th 1913, stepped onto the racetrack at the Epsom Derby with the intention of disrupting the race or possibly attaching a suffragette flag to the bridle of the horse belonging to King George V. The result was disastrous collision and the serious injuries she sustained resulted in her death four days later.

Emily Davison was seen by her contemporaries as something of a wild card.  She worked along Sylvia Pankhurst who was a socialist and was imprisoned nine times for stone throwing and arson. In prison she went on hunger strike while in Holloway Prison and was brutally force fed. She was not alone in her actions and history tells us that the battle for the Right To Vote for Women was a prolonged and bitter struggle. In fact, it was only after huge demonstrations, civil unrest and the impact of the 1st World War that the Government finally relented with the Representation of the People Act in 1928.

The suffragettes made great theatre of Davison’s funeral. The coffin was brought back to Victoria Station and taken in procession through streets lined with people to St George’s Bloomsbury. The 6,000 women who attended the service were asked to dress either “in black carrying purple irises, [or] in purple with crimson peonies, [or] in white bearing laurel wreaths… Graduates and clergy marched in their robes, suffrage societies, trade unionists from the East End. The streets were densely lined by silent, respectful crowds. 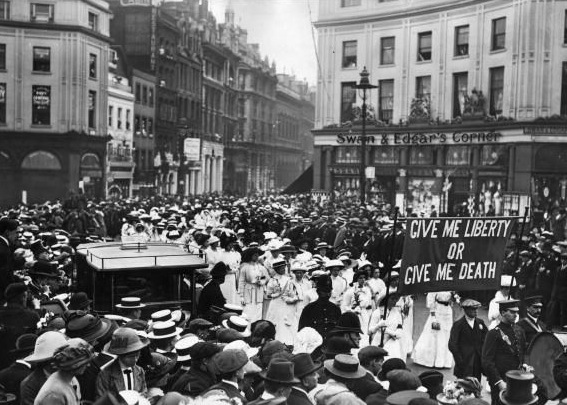 The Funeral – Give Me Liberty or Give Me Death

One hundred years on and in the same church that hosted her funeral The Jazz Warriors International are to deliver a night of music that celebrates the courage of Emily Davison in the struggle for human rights and dedicate their performance to those women around the world who have yet to achieve the basic right of a vote.

The previous three Jazz Warriors Int. / Nexus concerts have conjured up some amazing music and the line up for this concert features a wonderful array of artists including Elizabeth Ball (Violin), Fumi Okiji (Voice), Omar Puente  (Violin) and Pat Thomas (Piano)

The evening will be presented by author Bonnie Greer