FREEDOM! Last session of 2013. It was the closing night of the Jazz Festival and there were some weary people in the house, seems like a lot of sessions had been taken on board from Wayne Shorter to Wadada Leo Smith – who blew everyone away with his 12 Summers opus which was performed at Cafe Oto over 3 nights! Orphy Robinson and Cleveland Watkiss were fresh from doing their dub meets Duke Ellington session and are of like mind that, “It works!”

After last month’s FREEDOM! session that had included a muscular and intense contribution from Chicago based saxophonist/composer Ernest Dawkins expectations were high. The session was built around bassist Neil Charles, drummer Steve Noble, pianist Pat Thomas, harpist Tori Handley and irrepressible trumpet player Claude Deppa but it soon revealed a host of others including Corey Mwamba, Mo Nazam, Maurizio Ravalico, Larry Bartley, Loz Speyer, Emi Watanabe and Zuri who were set to take it another level.

It was good to see a succession of young players boldly hitting the stage while Jazzman Jack (!) took the mic to spit some spoken word. I has top said that Emi Watanabe’s wind-like flute solos over Cleveland’s beatboxing were both cleansing and uplifting. A little late night set (after most people had gone) from Corey Mwamba – cyclical percussive piano riffs – and vocalist C also provided a valuable moment of sweet reflection. 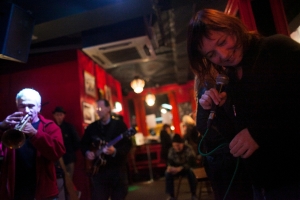 FREEDOM! is a Jazz warriors International session & will be back in 2014. Watch this space.