INNER VISIONS… The Museum Of Everything

FOLLOWING ON FROM THE MIND BLOWING MUSEUM OF EVERYTHING 3, which took place in an amazing, rambling and deceptively cavernous residence in Camden Town, comes their latest exhibition and somewhat surprisingly it’s found a home in the basement of Selfridges in heart of the West End.

It’s a warm Sunday afternoon and, despite the recession, Oxford Street is bustling with tourists and shoppers. As we approach Selfridges most people seem blissfully unaware that the window spaces have been taken over by images based on the works of numerous artists who exist not just outside the fine art conmmunity but outside the community as a whole.

Welcome to the debate on Art Brut, Outsider Art and plain old ART! The previous Museum Of Everything show in Primrose Hill had been an extraordinarily moving experience and as we descended the steps into the shabby, dim lit basement beneath the store a there was a refreshed sense of expectation. 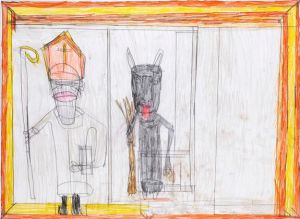 Museum of Everything 4 is curated by it’s founder James Bett and focuses on art made in studio workshops, some attached to hospitals, around the world, from Japan to Brazil, Germany to Australia. There are over 200 drawings, paintings and sculptures mostly produced by people who suffer a variety of psychological, neurological or physical problems, and while the work on show can be disturbing one is consistently drawn into the artistic process and the winning nature of the artworks themselves. It’s fascinating stuff, maybe because it’s not intended to be “Art”. For the most part these pieces are not produced for anyone other than its creator.

Of the individuals who have work work on show there’s William Scott “a citizen of inner skyline” who offers “wholesome encounters” including a “Rebirth of the Re United States” alongside Ruby Bradford, who hails from Project Onward in the USA and paints expressionistic images of Prince William and Prince Charles (who even gets to meet Superman!). Alan Constable, an Australian with seriously impaired vision makes clunky ceramic models of cameras while Michael Gerdsman crochets mobiles, a hairdryer, microphones, and pot plants. One man reinterprets posed images from women’s magazines while Tomoyuki Shinki has created stunning, contorted and interwoven paintings of wrestlers. Giovanni Galli draws stiletto wearing, underwear clad, voluptuous women and space rockets combine with disjointed texts detailing conspiracy theories, the evils of technology and global crisis. There are the black and white images of Jean Jaques Oost and the fabulous etchings of Sabine Münch portraying imaginary creatures.

There is a lot to take in. There’s humour and there’s obsessiveness whether its cupcakes or Harold Stofer’s endless lines of script that take on a textured life of their own. To get inside the rational of this show one needs to know where it’s coming from and to do that you need to chill out and read some the interviews that are dotted around the place. These interviews (and short films) give an insight into how the workshops have emerged in different countries. The stories behind each are compelling and inspiring. Each have different views about what should or should not be “taught”. You can have one place which lots of technicians to support those who use the workshops and there are those which have simply emerged and grown largely on a common energy mutual support. Either way, from Holland to Osaka to California they do an amazing job that inevitably produces some impressive and unforgettable work. 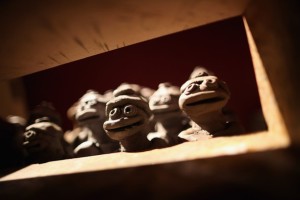 Stepping out of the slightly claustrophobic and grungy atmosphere of the “museum” into Selfridges with its dazzling bright lights, polished glass surfaces and chrome trimmings inevitably amplified a sense of societal discord between the quirky, sometimes deranged, meeting of minds in the basement and the “normal” world of unbridled consumerism. And, for that alone it’s worth the visit ’cause I’m not sure which was the most disturbing.

The Museum Of Everything 4 is on now!

1 Response to INNER VISIONS… The Museum Of Everything