The Shape Of Things To Come Pt. 3….. Worldwide Baby…

The excitement around Gilles Peterson’s Worldwide Awards 2012 had been mounting for weeks… months even.  Sold out well in advance and attracting punters and players from all over Europe the sense of anticipation was in the air as one entered KOKO to barrage of twisted synths, sub bass and clattering beats of Hudson Mohawke.

This former people’s palace with its warm, faded baroque grandeur became home to the Awards  after it the outgrew venues like Cargo and the Garage and the crowd is clearly a reflection of the audience that Peterson’s, soon to be axed, BBC Radio 1 show has nurtured. There was the odd face in the house from those Talking Loud days but it was  a new generation of youth attuned to joining the musical dots that packed the dancefloor and the balconies.

The Pyramids - Back In The day!

People kept asking me, “Who is DJ Lefto?” All I knew was he hails from Belgium is reknowned for his mixtapes and podcasts…. and on the night I seem to remember he played Art Farmer’s ‘Mau Mau’… it sounded g-o-o-o-o-d!

Michael Kiwanuka followed – with a band. He’s come along way since I saw him open up for Owiney Sigoma at Cafe Oto.  He’s notched up numerous high profile gigs and a BBC Sound of 2012 Award.  Having been championed by Peterson , the crowd was well attuned to his songs but sadly his band lacked basic musical power.  Still, it’s early days and I pray that the space which this gracious young man now occupies will allow him to shape a live setting that can lift and energise the dynamics of his songs.

The Worldwide Awards were preceded by a Gil Scott Heron tribute from two bold 15 year olds,  Joey and J’Danna, who brought the house down.

This year’s award was a funky springy thingy designed by Ada Chinonye Chime and it was dished out to those who won the categories:  Track Of The Year: Adele – ‘Rolling In The Deep/Jamie XX mix’,  Best Album: SBTRKT, Jazz Album: Matthew Halsall, Label: Brainfeeder, Play More Jazz:  Machinedrum, Worldwide Session: Michael Kiwanuka, Lifetime Achievement: Idris Ackamoor.  It was nice to see Jay Electronica in the house.

JAMIE XX: Track of the Year: Adele - Rollin' In The Deep Rmx

Thundercat’s set was guaranteed to be high point of the night and as one young lady put it… “Nice that it superceded all the hype!” The three piece was supplemented by a couple a backing vocalist but, in reality, it was all down to the keys, drums, and Thundercat’s 6 string bass and vocals.  Though tagged as modern ‘Fusion’ these guys create a sound that’s hard to categorise. The ebb and flow of their music goes from sweet and relaxed to an the energy level that is way up on the scale.  They can play! The drummer, Chaun Horton, was tremendous, battering his kit and laying down a powerful rhythmic bed over which Austin Peralta  was able to let off free flying flurries of sound and Thundercat himself  could let off! 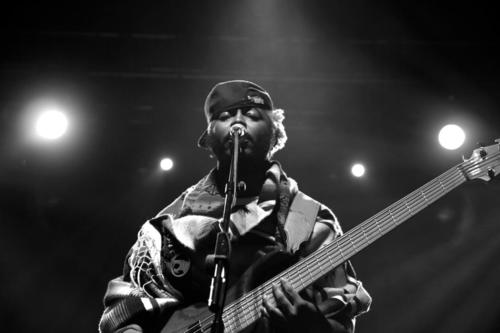 Their set totally confirmed the  Brainfeeder label should be on all our watch lists and the same has to be said for the next act – SBRKT. Let’s bid welcome to another, hard to categorise, nu-skool propducer who’s seductive , collaborative and song-led offerings earned him the vote of GP and the Brownswood Message Board boys for his groundbreaking album on Young Turks. In fact, judging by the response from the mosh-pit the people are already down with SBTRKT…. Big Time!

As I can’t think of another one-off, annual event that comes close to the Worldwide wards in encompassing a truly radical alignment of eclectic, creative,  cutting edge music from the rapidly shifting world of global dance culture. It’s a bold venture that’s free of invasive sponsorship and it really does provide a powerful snapshot, a marker in time,  as to the evolution of the music itself and  I have to doff my cap to GP, his  hard working crew (Simon, Peggy et al) and the Worldwide family itself.

Right now,  it’s all downhill to the summer and the World Festival in Sete.  Book that flight right now!

1 Response to The Shape Of Things To Come Pt. 3….. Worldwide Baby…