SPEAKER: THE ART OF ZAK OVE

SPEAKER: THE ART OF ZAK OVÉ is on at the Vigo Gallery in London’s West End until January 2nd. 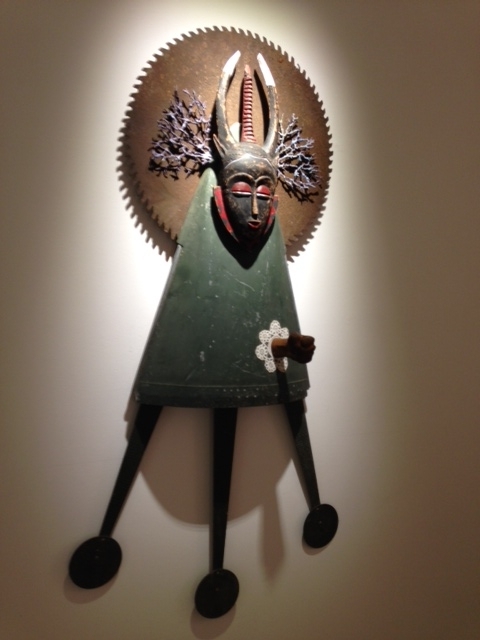 Last Tuesday evening saw the opening at the Vigo Gallery Of Zak Ové’s latest work and we were in for a most pleasant surprise. I know Zak as a photographer and film maker but as we walked into the gallery we were  confronted by two column-like figures with African masked faces constructed from various speaker boxes and the odd old amp. Each figure was embossed with various speakers from bass to mid to tweeter and more than one voice around us enthusiastically asked,”Do they work?” It would have been fun for each figure to rumble into life but they remained the silent gatekeepers to an impressive array of new pieces.

The ‘Speakers’ were flanked on one side by a large quietly menacing piece, constructed from yarns and hair that drew one into the world of African fetishes and magic. From the outset the viewer was confronted with an array of connections that span the diaspora but are rooted in the city of London.

In a brief conversation Zak explained that upon turning 40 he felt an irrepressible urge to explore avenues other than film and photography in order to convey his experiences and the ideas that were dominating his vision. To do that he has turned to 3D sculptural work and as someone of the multikulti Soul II Soul generation, like his friend and contemporary Hassan Hajjaj, he blends a contemporary sensibility with images that relate to the past and to his own heritage which is Trinidadian.

It’s the paintings that most convey the “Trini” aspect of the culture. There’s a strong batik feel to these psychedelic print/paintings and they mix and match humming birds with mysterious masquerade figures amid bold sweeping colour and movement.

Found objects or objects collected on the journey… wooden crocodiles, driftwoood, some kind of wooden keys that resembled carved African masks, lace doilies, circular saw blades… are put to work in all the pieces. Figures are created using a chair back or legs from a table – legs which are then adorned with old school roller skates. His work is imbued with movement that spans time and place. As people we seem to be constantly on the move, migration is a fact of life in these times as it was in the past. Along with economic migrants there are still those who are forced to flee wars, famines, nuclear disaster. In one piece a globe sits at the end of a turned, spiraling piece of furniture while above it the masked face of this character is encircled by tiny lorries on the move..

The exhibition includes simple, powerful striking imagery alongside artwork that is  complex and deep, like his homage to the doors that adorn the buildings in Dogon. “History is his story. Mystery is my story,” said Sun Ra and I’m feeling there a touch of the astral traveler in Zak Ové.