Next Monday – July 13th – will see the first FREEDOM! – The Art of Improvisation jam since the highly enlightening two day FREEDOM! Festival held at The Vortex in Dalston’s Gillett Square over the weekend of June 27/28th.

The FREEDOM!Festival was inaugurated by Warriors International. The roots of this collective are in the original Jazz Warriors – an ensemble who transmitted the cultural experiences of the Caribbean community and others from the former British Empire into this thing called Jazz. In 2015 these master musicians have succeeded in uniting with a new generation of players, all eager to shatter boundaries, and a fascinating array of virtuoso fellow travelers from the world of new classical and pure “improv”. Each day began with workshops. Cleveland Watkiss led a voice workshop, Claude Deppa and Ray Carless tackled music from the original Jazz Warriors LP and Steve Beresford dealt with approaches to advanced improvisation. As with the rest of FREEDOM!Festival it was all about exchange and the art of listening.

The day kicked off with Amplifier – an impressionistic spoken word piece with an accompanying film by spoken word artist  HBK Finn and fellow American poetess Nubluz Aesthete. Britain’s most innovative trumpet player Byron Wallen added his own unique array of sounds and melody and yours truly was roped in towards the end of the piece to add some impressionistic rhythms and sounds from my vinyl collection… Amina Myers’ ‘Have No Fear’ felt wonderfully apt.

The Saturday session coincided with the funeral of a Master of the Art Of Improvisation – Ornette Coleman in NYC and it was down to alto saxophonist Tony Kofi’s Spinx Trio – which was supplemented by the vocals of Cleveland Watkiss and the vibes of Orphy Robinson – to offer up a transatlantic musical libation that plumbed the depths of Ornette’s music. Intermittent taped interviews, done by Jazz On 3’s Jez Nelson, with Ornette, Don Cherry et al added to the ethereal dimension of the event. The synchronicity of events combined with Kofi’s passion for Ornette’s compositions and skill on alto produced a stream of muscular music underpinned by the composer’s “harmolodic” concepts. The set was bright,  angular, soulful and challenging. Kofi’s spirit possessed horn opened the pathways and filled the room with a reflective celebratory energy that touched all present.

The stunning Xenicibis Ensemble made their debut mid afternoon and blew us all away. Playing together for the first time. they harnessed the combined talents of five women and three guys. Everyone onstage was outstanding. This young ensemble provided a unique listening experience, a shifting soundscape laced with the element of surprise. Two horn players, piano, harp, harmonica, percussion, electric bass. Beibei Wang aired a splendid red thunder drum emblazoned with dragons and Philip Achille on Harmonica never failed to dazzle. The communication between Freedom regulars Renell Shaw (bass) and Tori Handsley (harp) helped ground the compositions while pianist Zuri Jarrett-Boswell delivered urgent, intermittent shards of sound. The vocalist, Sahra Gure, introduced a range of middle eastern echoes that sat well with her fellow musicians, especially Nubya Garcia on tenor sax and Cath Roberts on baritone sax. 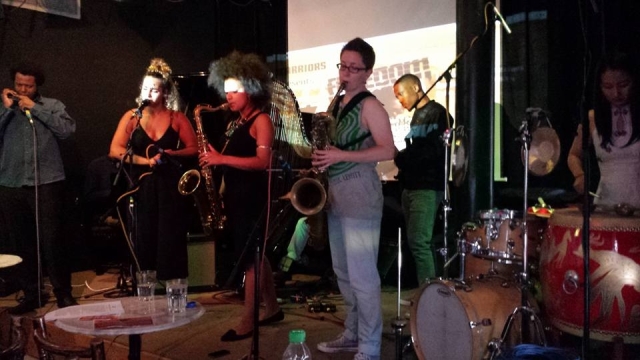 Saturday ended downstairs at the Vortex with Orphy and Cleveland – Two Bad DJs – on their laptops mixing vintage Duke Ellington era swing with dub before they went off on a classic set of ska and reggae tunes that drew on their youth-days in their local manor of Hackney.

SUNDAY continued the vibe and I’m going list a few quotes from other scribblers who were in the house to paint the picture. First up came, a mesmerising strings set built around Kate Shortt and Alison Blunt:

Thomas Rees – Artsdesk : “Tt was down to the Freeform Improv Strings to start the final afternoon. A short improvisation from violinist Alison Blunt and cellist Kate Shortt incorporated beguiling snatches of dialogue along with scampering pizzicato lines and trembling melodies. James O’Sullivan prepared his guitar with spanners and plastic rods, producing sudden pops and gargling distortion, and Theo Sinarkis reached for a broken bow, wrapping the limp horsehair around the strings of his bass to delicate, percussive effect. The session ended with a collective improvisation from all the strings on stage that opened with palm slaps and yelping guitar before settling into something softer and more mysterious, with special guest Steve Beresford’s piano lines insinuating themselves into the music like white-hot nerve fibres.”

Though he hadn’t planned it Guillaume Viltard was recruited to the Freeform strings and delivered some stunning bass. It more than prepared him for the epic Rowland Sutherland Quartet set which incorporated the pulsating modal music of McCoy Tyner, Joe Henderson and Alice Coltrane that was to come next.

Kevin Legendre – Jazzwise : “A majestic set by Rowland Sutherland that took as its point of departure a series of landmark moments in the journey of jazz to the East, both culturally and musically above all, Alice Coltrane’s ‘Blue Nile.’ After recent studies in Japan with shakuhachi masters, Sutherland has enriched what was an already formidable technique, and the unique configuration of this ensemble – double bassist Guillaume Viltard and multi-instrumentalist Ansuman Biswas – only heightened the freshness. Indeed the moments where Biswas brought a fluttering low end into play by way of a bansuri flute dipping under Sutherland lead were beautiful, as were some of Beresford’s needlework electronics”. 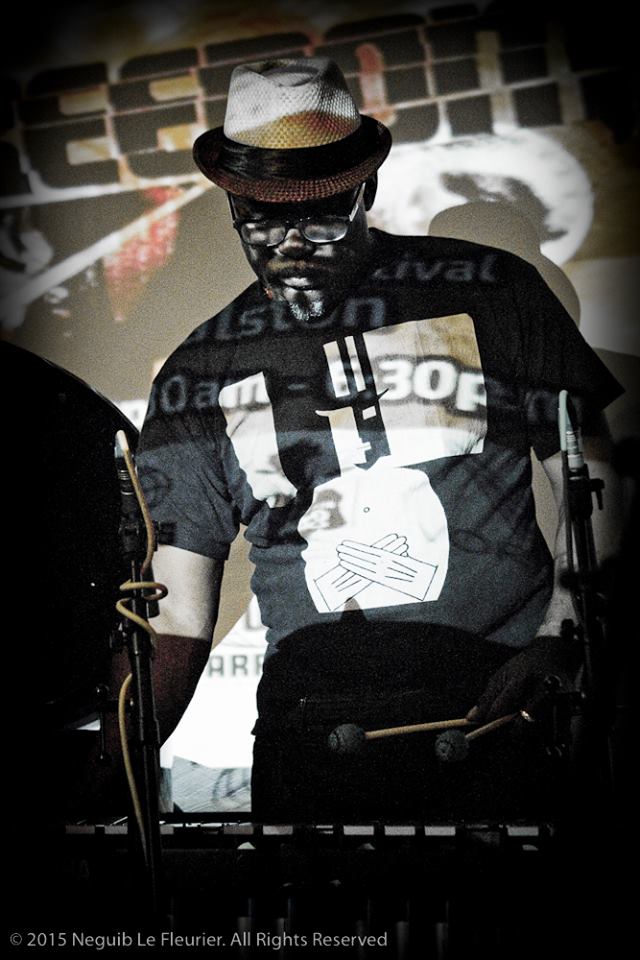 For me, Black Top provided the most radical set of the festival. Thrilling is the only way to desctibe their shape shifting sets and this is how Kevin Legendre, who was our host/compere for the day, heard it.

Kevin Legendre – Jazzwise : “Watkiss the jazz vocalist slips seamlessly into the guise of dancehall chatter, or perhaps toaster, to retain the temperature-raising metaphor, as horns and keys crackle and hiss into silence, and therein lies the beauty of Black Top. At face value it is an avant-garde adventure in sound: an unscripted session in the lineage of anybody from AEC and Lester Bowie to Sam Rivers and Rivbea. However, it is also a direct engagement with what passes for popular music but has a fiendishly advanced sonic science at its roots: dub, specifically, electronica, generally. In the process the ground between the aforementioned players and producers such as the Perrys and Bunnys is leveled while the audience is invited to rake over the idea that the cry of a saxophone belongs in the same emotional and musical space as the holler on a microphone that is held deep in the echo chamber.

With Williams on board there is a resonantly funky undertow to proceedings with his sponge-like tone and wiry pentatonic lines laying down solid ostinatos over which Thomas and Robinson make merry with all manner of chordal twists and turns on their respective keyboards. Sketching out deliciously spiky harmonic territory, where snatches of distorted and filtered samples are thrown into the air, the ensemble locks into a groove that brings the rhythmic pummels of Musson and Ramanan well to the fore. And then the changes of direction come thick and fast as Thomas triggers a beat that enables Mondesir to show the percussive finesse of his tympani sticks and Watkiss to articulate a series of spooky, glassy melodies before the group sound splinters into pinball call and response amid a barrage of artisan audio.”

DEEP. That was how I’d describe Black Top. There is no other ensemble, in the world, quite like them. And finally, each afternoon finished in traditional FREEDOM! fashion whereby anyone in house with their instrument was invited to play… inspiration continued to flow and the spirit continues.

Final thought: During the weekend I played a lot of tunes between sets / compositions on my single turntable and had a constant flow of people asking what was what… Unfortunately, I’ve emptied my record bag but the weekend had a strong emphasis on AACM related projects… here’s a few tunes I recall created a vibe: