Pre Dawn scribblings on a trip to Aotearoa… this is Part 1… Nuff more to come!

It’s 3.15 am. I’ve been off the digital radar for the past ten days.  Swifty and I were working on a couple of British Council funded projects in Aukland, New Zealand aka Aotearoa. Arrived back in London town  yesterday. Got an Addison & Lee cab from Heathrow to Stokie dropping Swift in Ealing on the way. It cost £91.00. A  rather deranged and sobering welcome back to pre-Olympic / Golden Jubilee Bighty n’est pas!

Anyway, I’m wide awake and my head is buzzing with the after-shocks of the Aotearoa trip. I’m sat at the computer sporting my Day Of  The Dead  Cut Collective designed LatinAotearoa sweatshirt and I can’t quite believe that the LatinAotearoa trio of  Bobby Brazuka, Isaac Aeoli and Jennifer Zea – who I met at Conch Records –  are booked to play the Ridley Road Market Bar in Dalston in June! Aukland – Dalston. Wordldwide 2012.  LatinAotearo in E8…  choice!

Woke up at 3am dreaming about fracking…. Hydraulic Fracturing… yes, fracking… fracking hell! Just saw Josh Fox’s  film ‘Gasland’. It was in the Art House section of films available on the flight to Aukland. They’ve got an issue with fracking in New Zealand which is not surprising as the two islands are volcanic and the city  of Christchurch was recently flattened by an earthquake. In fact, we’ve also had an issue with fracking here in the UK. They suspect fracking caused an earthquake in Blackpool….

let’s pray it didn’t damage the Tower or shook some bolts loose on those mental “fairground” rides. Also isn’t Blackpoool a stones throw away from Sellafied, that nuclear reprocessing facility on the edge of the Lake District?

Yes, fracking. In fact, prior to flying to Aotearoa I recall seeing a short news interview with hard-hat-wearing Yankee muthah-earth fuckah, somewhere in the north of England, telling the nation that it’s all good… safe as houses…. of course he didn’t say that but that’s what he mean’t.

I woke up this morning, mind racing, thinking the people need to know the truth. They need to see Josh Fox’s film. They need to know the impact it can have on the land, the rivers, the wild life and the people. They need to see the incredible scale of this thing in the USA (it’s massive!) and know that Dick Cheney – what a scumbag – sidestepped the crucial Clean Water Act (don’t we all need clean water?) giving free reign to a rapacious, profit driven energy industry who operate under the guise of nationalism and the promise of energy that leaves the nation less open to terrorism. 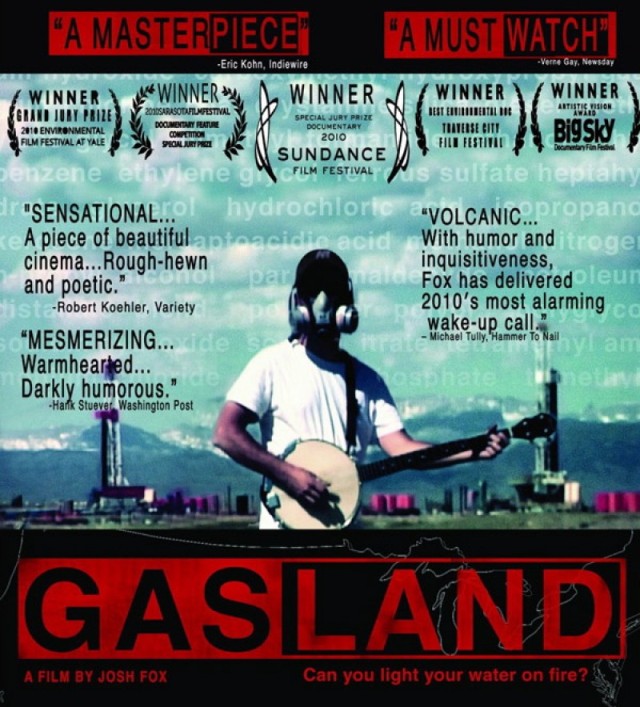 Jet lag is a strange one. I feel like I’ve been jet lagged for about a week now and right now… 4.30am… I’m in a kind of nether world between dark and light and I’m convinced that the dark forces out there need to be confronted by the light.

I’m thinking,  let’s face it, ‘Gasland’ might make it onto Storyville on BBC4 but the powers that be in broadcasting will never hype up  ‘Gasland’ with lots of juicy trailers and show it at peak time straight after The Voice… and then as I flicked though the UK news, which I’ve  hardly seen for nigh on two weeks, I discover that that Cameron and his Lib Dem Energy secretary have backtracked on fracking! It appears that the experts have determined that the UK’s reserves were smaller than first thought and could be uneconomical to extract.

Too much controversy for too little return! The last thing Cameron and his cronies needed is an rebellion in the shires. Besides, the PM loves nothing more than a gallop through this green and pleasant land on a retired police horse, loaned surreptitiously from the MET, with his mates (think:  Rebekah & Charlie Brooks… an arrogant duo, both of whom seem to be looking at jail time!).

We need to give thanks for those vigilant Green activists who were onto fracking like a dog on a bone and while the “Shale Gas Bubble” may have burst vigilance is still the order of the day.  Hydraulic Fracturing may have slipped from the government’s energy strategy but will this stop these companies from pursuing the practice of fracking in order to access what natural gas exists? Or is it business as usual?

For example, only a month ago, an MD at Centrica declared that UK shale production was not “going to be a game changer”. However, he still maintained it was important and “we should develop it”.  A further statement from Shell yesterday accepted that development will be a bit slower in Europe because of problems of both “geology and community impact” but despite UK shale gas being unproven geologically they are still “taking a look to see what the potential might be.” 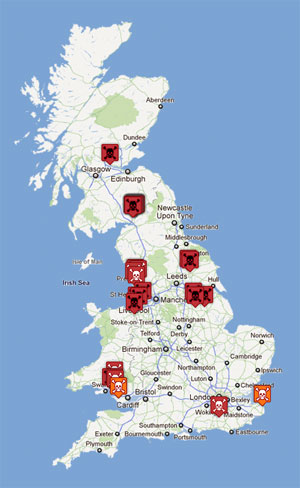 Vigilance is clearly the order of the day. When I think of ‘Gasland’ I think of man he could set fire to water coming out of his tap and Woody Guthrie singing ‘This Land Is Your Land’…. when I think of England I currently think of David Hockney. Think about the thousands of people who flocked to the Royal Academy to see Hockney’s paintings and the impact of that show. It’s impossible to quantify the sheer enjoyment people had in savouring both the artists’ unique take on nature and the splendour of the Yorkshire Dales where he grew up

The message should be loud and clear:  ‘FRACK OFF!’ and invest your money in radical renewable alternatives!

Enuff … it’s 7am others are about to rise… time for some breakfast…. Trip to Aotearoa Part 2 … first stop Singapore… the palm of Buddha… soon come…

Flash It! The Pics in the distinctive funky curved corner frames are by Swifty instagram!

1 Response to Pre Dawn scribblings on a trip to Aotearoa… this is Part 1… Nuff more to come!